It looks similar to The Tiny Bang Story, but different developer.
djrum

I haven't tried it yet, luvtoread.

I installed an Ominous (something or another) game and it messed up on me. Totally quit working, kicked me out and went to my desktop.

I'm going back in to see if I can possibly play the darned thing.

Well, it's letting me play for the time being. Ominous Objects: Mirrors Breaking All Over the Place is the game I'm playing. Not the correct title, but that mirror breaking noise is driving me crazy!

And....it snowed all day yesterday! I thought we were supposed to have an early Spring.

I know what you mean, I don't like driving in it either.

Our weather's been really strange. Our 7 day forecast starting Mon. is calling for highs in the 70's.
kac

I can't wait for Spring either. I'm so sick of Winter.

Sorry I've been awol. Life is way too busy for my happiness some times. I haven't had a lot of time to play many games but I did dig into my stash of unplayed games and loaded up Psycho Train. It's by Alawar and seems like a bit of a throw back. There's even text instead of voice overs. It's not brilliant but it's not completely terrible either. The sale this weekend is lame so I'm not buying anything. Unlike when I first got hooked on the games, now I am able to wait a bit more patiently.

Been cooking today and now it's time to clean up and hopefully tame the dog hair that is never-ending in my house! Hope you all have a great week!
Esme

I know I gripe about how dumb some ERS games can be, but holy

This one takes dumb to a whole new depth!

I'm finishing up Spirits of Mystery: Chains of Promise... which I started several months ago and was so underwhelmed by that I forgot about it.


AAAA NEEE WAYYY... I just did something so dumb, so outrageous, so INSANE it could only be ERS logic.

You are NOT going to believe this!:
Made a dungeon key out of bread.

I'm rarely speechless, but now... I don't even know what to say.

ERS. I hate you.
kac

Must have been really stale.
Esme

kac wrote:Must have been really stale.

About as stale as the plot!

Hope you all are doing well. It's been another busy and crazy week for me. Extra hours at work for parent/teacher conferences... progress reports... etc. My MIL passed away on Wednesday too, so since we live across the country, it's been tricky planning things and with Holy Week it's been a challenge to set up the funeral. We're fine, so don't worry. We weren't especially close, but you still want to do the right thing in a situation like this.

Needless to say, I haven't really played any games this week until tonight. I'm working my way through Living Legends: Bound by Wishes. It's all blue roses and squirrels. Not terrible, but not OMG WOW SO COOL either. Since I rarely feel OMG WOW SO COOL about games anymore, it will suffice. People still make stupid choices and do stupid things in games but hey, they do that in real life too, right?

Things are going fine otherwise. The pups are doing well. We had Pippa the Shar Pei's eye surgery done, so now she can see much better which allows her to get into even more stuff.

Have to get new blinds and a new Roman shade since she killed the ones I had. Good thing she's a cute little stinker!

Anyway, I hope you are all doing well and having fun and playing lots of good games and reading lots of great books.

And "Hi" everyone else!

Thought I'd let you know, Windows 10 works fine, manages all 700 BFG games - all of which are downloaded and stored on an external drive - both the old and the new.

But that is on my system, which isn't by any means mod-con, but since many of you have Windows XP, it is a big jump from there, and you will have to download the latest vid cards etc. But never fear, Windows will choose the ones you need, download and install them, all with your approval first.

Two things to be careful about. Microsoft Edge (latest browser) is horrendously hard to use and even my IT saint can't figure out how to use it properly. A switch to another browser is really the only solution. Me being me, Chrome have a new browser in test phase, and guess who volunteered to be a guinea pig.

See, you thought I was only obsessed with cats and dragons... love piggies from anywhere really, not just Guinea, I'm not racist that way.

Be careful of Cortana. Sure it is super cool having your computer ask you in this lovely voice what you want, and use your name! Was blown away when she suddenly called Justie!

But she seems to mess with stuff. When she is activated, she sometimes over rides some commands from elsewhere.
However, with the pretty new Google Canary, and my wonderful new Office suite (so well done and such fundamental improvements!), I happily ignore both Edge and Cortana and everything is excellent.

Think of you guys lots.
@genki! Awesome graphics as usual, but this one is particularly "dark and eerie"

JTF   So good hearing from you.   My Google account got so messed up when I got this computer.

Someone else's name and face kept popping up with my google account name  (I wished I
look as good as her!).
Trying to fix it was such a pain,  and it messed up my  YouTube sign in.   I tried opening an
account under another name,  thought I was good to go,  but, no.   I just gave up.
So much easier.
So now they have Cortina on your computer?   I know they have her on a cell phone.

I have just finished playing Grim Tales:  The Heir.   If you have not played it,  I highly
recommend buying the CE.   Definitely!!   The Bonus is good and shocking.
For those of you have have played it,  what did you think?   Remember how she
looked like Angela Lansbury in the last one?

I must say,  I like Brandon.   The one family member who did not seem to turn out
like his parents;    you know,   the father who kept his "wolfiness"  a secret.
Later went to Siberia to try to figure out why his family was having
problems after he moved them to a crumbling house in the woods with no one
around but a witch?   Idiot broke his leg.
Ditsy mom got captured by witch.

This one is good, I thought.

It smells like my downstairs neighbor is cooking Cabbage.    No,  he is not Irish
and yes,  it stinks!

I used to hate when my Mom would make sauerkraut.  That would smell so bad!
Esme

I'm currently playing the new Endless Fables: Minotaur's Curse. It's by a new developer. I think. It's surprisingly okay so far. I mean, you DO have to rescue Hephaestus from an evil plant but still... not as dumb as some of the things I've played in my day. (Hephaestus is the god of the forge... Vulcan in Roman mythology... not a tiny, powerless god, but I digress...) Though there are collectibles, they are varied... some morph... and not at all easy to spot. Like I said, it's fairly enjoyable so far.

Oh, and Happy St. Paddy's a day or two late from Pippa and Finch! 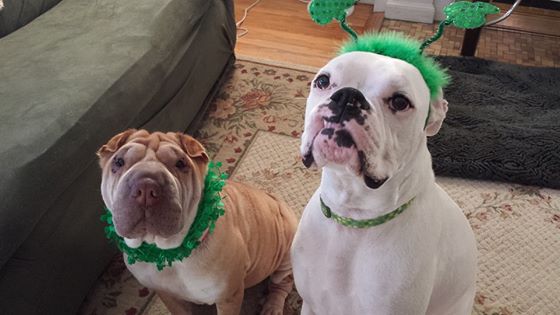 they are so cute

I added a new beta in the thread... something called Vermillion Watch: Mooregate Accord.

The secondary spelling of vermilion is bugging me, but I'll deal with it. LOL
kac

No problem, kac! I'm enjoying it myself. It's sort of "League of Extraordinary Gentlemen" meets "Dr. Jeckyl and Mr. Hyde" with some, I don't know... Ye Olde Englande types and some butt whoopin. I think it's the start of a new series and so far it's pretty cool!

Okay, I finished the beta and for the first time in a LONG time I am excited about a game! The story line feels fresh and new and interesting. The puzzles had a different take to them and it was FUN! I can't wait for the game to come out. The visuals and sound were top notch and I'm sorry if I sound like I'm gushing, but it was actually fun and felt different.

It's got Irene Adler, Jeckyl/Hyde, and a secret society who battles evil... the Vermillion Accord of the title. I can't wait for somebody else to try it so we can talk about it!

I am trying to respond, esme but keep getting a timed out