Tales from the Borderlands
by Telltale Games - November, 2014

Tales from the Borderlands is a five part episodic game series from the creators of The Wolf Among Us and The Walking Dead: A Telltale Games Series. Set on the unforgiving world of Pandora after the events seen in Borderlands 2, this is a story full of Borderlands’ trademark humor, following two adventurers on their quest for greatness.

You’ll play as Rhys, a Hyperion ‘suit’ with dreams of being the next Handsome Jack, and Fiona, a Pandoran con artist looking to score her biggest ever swindle. Thrown together as unwilling partners in an adventure to recover cash they both think is theirs, their journey will take you on a wild ride where gangsters, bandit lords, and Vault Hunters are just some of the obstacles you’ll encounter, in this new take on the award-winning universe created by Gearbox Software. 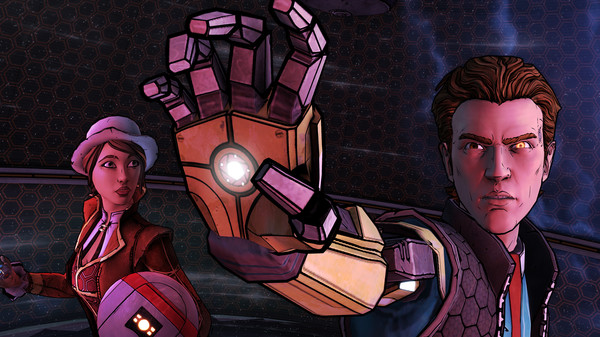 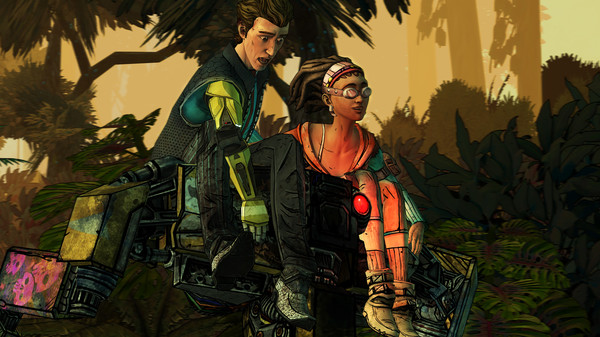 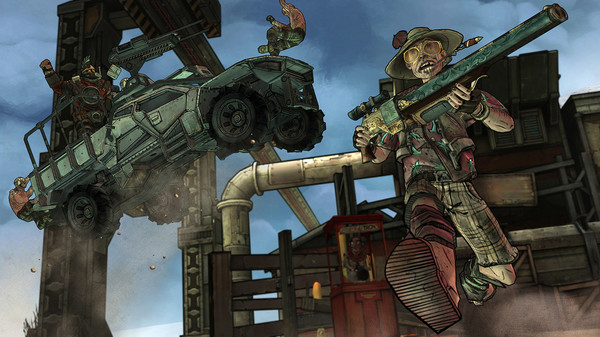 Re: Tales from the Borderlands

Just realized that I forgot to post this publicly!


Tales from the Borderlands (Adventure)

Options include Controls (controller or mouse, not re-bindable), Audio/Video (separate sliders for master volume, music, and brightness -- Subtitles are NOT the default, so if you want them, turn them on here), Gameplay Settings (Invert Y and Display Style -- no idea what these do), Graphics Settings (texture quality, anti-aliasing, full screen or windowed, and resolution from 800x450 up to 1920x1080.)

You can have up to four saved games, and like the other episodic Telltale Games series, you can "rewind" and re-do something if you so choose (from the main menu.)  You will of course lose all of your progress up to that point, though.

If you haven't played this type of game before, it's kind of like an interactive movie... and yet the moments where you're making your choices aren't jarring or disruptive to the flow of the game/story.  Choices are timed, which adds an urgency to the gameplay and keeps things (even more) interesting, but if you don't like anything timed, no worries -- You can pause the game by hitting the space bar.  Well, that will help with the timed choices, but there are a few action sequences that you'll have to deal with.  Nothing game-stopping for those without good reflexes, though I did have to re-do several scenes.

Now that we've got the boring stuff out of the way, let me preface this review by saying that I only recently obtained the original Borderlands games -- I have not played them yet, so I am not familiar with the Borderlands lore.  This game apparently takes place after the events of Borderlands 2.

To be honest I wasn't sure that I was going to like the game when I first started playing, as I wasn't sure that I liked the characters or the story line.  By the beginning of chapter 2, though, I was completely sucked in.  There was a moment during the opening credits of episode 2 (of all things!) that had me almost literally shouting, "Oh my god, this is so frickin' AWESOME!"  I DID literally do a fist-pump.

For those who have played the game, my favorite characters are actually

Not to say that I didn't like the other characters -- I loved 'em all, good and bad and in between!  I'm just partial to these four.

This is pure Telltale, with fantastic storytelling, eye-catching graphics, rich characters, perfectly-chosen music and sound effects, great voice-acting, and immersive environments... and yet, it's completely different than the other titles in their repertoire.  There were twists and turns that I never saw coming, and in the end, I was flabbergasted by how far we came in just five episodes.  The Walking Dead will always be my favorite -- 'cause, well, ZOMBIES

-- but Tales from the Borderlands takes a close second for me!  Absolutely recommended, whether you're a Borderlands fanatic, or a newbie like me.
_________________
Never be a prisoner of your past.
It was just a lesson, not a life sentence.