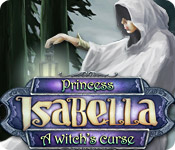 Princess Isabella is all set to marry the love of her dreams, Prince Adam. After returning home from a trip, however, she finds that
an evil curse has been placed on her castle by a mysterious witch. The curse has placed evil in every room, and turned everyone inside the castle into mirrors! Follow a fairy friend as you piece together the clues and save your friends and family in Princess Isabella: A Witch`s Curse, a gorgeous Hidden Object Adventure game!

Re: Princess Isabella 1: A Witch's Curse

I played all the way through this game today, so now I have opinions to share

Interesting story, kind of a twist on the Sleeping Beauty story,
with a witch cursing a castle, and only the Princess is left unscathed.

I found the graphics nice, the hidden object areas not too jumbled
and definitely things you'd be looking for. There's an adventure-esque
feel to it, as you spend at least half of the game time collecting items
for mini-puzzles and other interactive areas.

Do-able puzzles that you will not need a walkthrough for.

If you don't feel like doing a puzzle, click on the fairy and there is an option to skip.

Now for the warning and not-so-enjoyable aspects.

This game has quite a bit of the occult in it. Your Princess is
casting spells to lift the curses in the castle, but she is making
potions with things like frogs and newt's eyes to do so. I would
normally expect the evil witch to use such methods, not the heroine of
the story. Something I could overlook, usually.

You must lift curses in some areas by finding the evil - snakes and skulls. Find them all and lift the curse.

As you progress through the story, you get hints of who and what is
behind the attack on the castle. It didn't take me long to figure it
out, and it was OK at first... Until you got the whole story, and then
it was downright upsetting.

The fairy helper's voice is SO annoying! Turning off the sound is a good choice for this game.

Portrayal of snakes as "evil". Slithery, misunderstood and creepy to some, but hard for me to see them as inherently evil.

Upsetting story with horrible ending >_< If they had ended it
just 30 seconds earlier, I wouldn't be left with this awful feeling,
PLUS, they'd have had room for a sequel!