Series links: City of Fools, Who Am I? 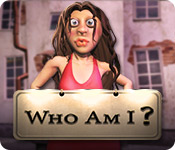 Who Am I is an immersive hidden object adventure of an epic scale. Take the role of an undercover agent investigating strange sci-fi incidents in the city as the threat of a weapon of mass destruction looms. Solve puzzles and seek out clues in over 70 detailed scenes. Find out who you really are to save the world!

There are several complaints about how short this game is. Apparently the play time is 2 hours or less.