Witches' Legacy 3: Hunter and the Hunted

Witches' Legacy 3: Hunter and the Hunted

Witches' Legacy: Hunter and the Hunted
by EleFun Games - January, 2014 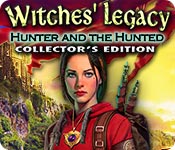 Carrie and her adopted daughter Lynn had finally found peace within the mansion that had once known only tragedy. But that peace is shattered when an ancient Order of Witch Hunters kidnaps Lynn. Carrie must now join forces with an old foe to locate their secret headquarters and rescue her. Time is running out for Lynn. Can Carrie convince them that her daughter uses magic for good? Find out in Witches' Legacy: Hunter and the Hunted, an exciting hidden-object puzzle adventure.

Re: Witches' Legacy 3: Hunter and the Hunted

The Tables Are Turned!


FIRST IMPRESSIONS
What I really like about this series is that each game is a genuine sequel in the lives of Carrie and Lynn, and that the intro to each game gives a tidy recap of the story so far. Without spending a lot of time on it, we are once again connected to the trials of these two remarkable women.

SIGHTS & SOUNDS
As with the previous Witches’ Legacy games, the quality is excellent. Beautiful graphics – although I still maintain they are not as clear as they could be, there is something granular about the graphics that I just don’t like. The imagery, however, is delightful, and well done cut scenes are used most effectively to keep the drama going. The music is pleasant and varied. The voiceovers in particular are interesting. You may not like them all, but each is unique and reflects the character they are portraying. Backgrounds sounds did not intrude.

WHAT’S HAPPENING?
After surviving their 2nd confrontation with Elizabeth and then the Queen of Witches, our heroines are enjoying a little well-earned quiet happiness. But soon it ends when an organization of Witch Hunters kidnaps Lynn. It is such a treat to have the witches on the side of good and the witch hunters as the bad guys. Not interested in whether it makes a statement or not – just glad for the change!

Our ladies are joined again by the cheeky imp who helped out last time, and he is joined by an unlikely ally – Elizabeth herself, in her doll form. Now, I gotta say, beware of false friends, because I still don’t trust her! But for those who are over cute, at least she’s an ugly companion and not all that nice! Actually, she is very well drawn and a credit to the artist.

GAMEPLAY
Fairly standard HOPA fare here, with some good and new puzzles. There are 29 puzzles, plus 30 HOPs. The HOPs are interactive word lists where the interactions may be simply lifting a curtain to reveal half a dozen items, or a series of steps to find one. As an alternative, you can play memory card game, where each 2 pairs removes one object from the list. The interactive jump map is helpful, clearly indicating where you can act immediately, and hint is directional. There is a journal which keeps info on progress, but not much.

There is a game timer which indicates that the 45 mins I spent on the demo was about 25% of the whole game. I did not finish the demo.

Collectibles: 35 morphing objects, and 40 puzzle pieces (jigsaw) which make up 5 character info cards and an a personal wallpaper for each one.

Achievements: 12, some story driven, some performance.

According to the blurb, a 2nd extra game infiltrating the Order of Witch Hunters.

COMBINED IMPACT
I really like this game. I don’t love love love it, but I do think it’s a good quality entertaining and original game.