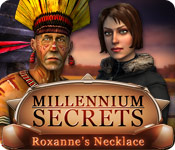 A terrifying explosion has destroyed a secret bunker and you have been called in to investigate! Capture the culprit before it’s too late in Millennium Secrets: Roxanne’s Necklace! Help solve an ancient mystery and stop the evildoer from striking again! Find clues and work through a tangled chain of events in this exciting Hidden Object Puzzle Adventure game.

FIRST IMPRESSIONS
Now this one was a surprise! Twice I have started this game, and twice I’ve wondered how it ended up on my desktop, I hated it so much. I never got past the first chapter. The look and feel of it seemed archaic, and I just didn’t like it, even with the u-beaut features like 360 deg pan.

Well, third time’s the charm. Coming back to this game with more experience under my belt, I started to see what I missed before. This game is like an adventure/rpg game, in both graphics and gameplay. The reason it feels so old to me is that it has been years since I played this style of game.

SIGHTS & SOUNDS
The graphics are 3D, clunky admittedly, but once into it, you don’t notice. The pan is in most locations, and is great once you get used to it. This is a sci-fi game, so there are lots of strange machinery and power systems, and nothing much that could be called attractive. The music is that eerie electronic whine you get with most sci-fi games. The voiceovers are sporadic, but very good.

MAKING PROGRESS
You are investigating an explosion in a secret base. You are a junior agent and so are given the simple tasks before being allowed to actively look for clues. So in every location there are items you must find, and only occasionally will they be found in a HOP scene. But finding things can be a challenge even in the general location. Boxes must be moved, chests opened, lights directed to the right corner... all to find those 15 fuses you need to start the generator – you get the idea.

Puzzles are not a huge part of the game, but they are loads of fun. Most of them are new to me, and some were too hard for me to do. Skip is delightfully quick! I had to refer to the walkthrough once on an action I would have called a puzzle but which was not skippable, and the context didn’t give enough information.

Each chapter is a closed system, with its own objectives, locations, characters, and (interactive jump) maps. Etc. There is also a journal which can be really handy, with tasks included. Hint transports you instantly to where you need to be.

FAMOUS LAST WORDS
If you like adventure games (or large file), or you would like to learn how to play them, this is an appealing adventure-lite choice.