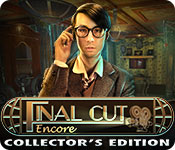 Your murderous half-sister has escaped, and you've got the last piece of your father's treacherous film projector. The breakout success story returns for an encore as you uncover the truth about your father's dark secrets and find out who’s really behind his death and his deadly invention in Final Cut: Encore.

I can't wait to get this one. I loved the first one. I like it when the developers branch out a bit and try different time settings and places. I hope it's as fun as the first one!

The first Final Cut game was a spectacular TRIBUTE to the ART of CINEMATOGRAPHY. Despite graphics that to my eye are not as high quality, this game is NO LESS a work of art. And MORE FUN. There are more exciting things happening and lots of interesting LOCATIONS.

The ARTWORK is still VERY GOOD, but it seems a little less seamless and a little more fuzzy. All of it seems to be in the right time period, and looks very AUTHENTIC. The MUSIC is DRAMATIC and can catch you unawares. It made me jump a couple of times.

This game picks up the STORY a year after the events of the first. Our crazy half-sister, who tried to kill us last time, has ESCAPED from the asylum, and we can only assume we are again in danger. Luckily, Dad’s old friend the General is there to whisk us off to the safety of the nearby ARMY BASE.

But really WEIRD STUFF starts happening even before we’re through the gates, and we crash just outside of them. The GENERAL is unconscious and we go off looking for help. Soon the HALLUCINATIONS that caused the accident start again. But now we discover their SOURCE. An apparently ordinary FILM PROJECTOR. If you’ve played the other game, you’ll know immediately where this is going. If not, you’ll soon catch up.

I prefer the GAMEPLAY of this one over Final Cut 1. It is EASIER on the old brain cells. HO SCENES are INTERACTIVE LIST, or you can try your hand at MATCH 3 instead. All the objects are CLEAR & LARGE, and the scenes not overly cluttered.
The PUZZLES so far I have found REASONABLY EASY, and include ones that I’ve seen before but only in other games by this developer.

The ADVENTURE is logical, but interesting. It is made TRICKY by a wonderful trick I love to see. Remember those HALLUCINATIONS? Well, once we learn how to shut them down, we have 2 VISUAL OPTIONS for each LOCATION. The ability to use items from one to the other greatly increases the complexity (and interest) of the GAMEPLAY.

COLLECTIBLES include MORPHING OBJECTS, film strips, and lucky clovers. There are also ACHIEVEMENTS. Other CE EXTRAS are wallpapers, music, SG, Bonus Game, replayable HOs and puzzles, and a “special bonus chapter”, which is secret.

This is another PREMIUM QUALITY game from this developer.