Margrave 3: The Curse of the Severed Heart

Margrave 3: The Curse of the Severed Heart

Margrave: The Curse of the Severed Heart
by Inertia Software - March, 2011

Series links:  Margrave 3: The Curse of the Severed Heart, Margrave 4: The Blacksmith's Daughter 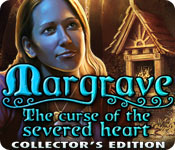 Deep  in the English countryside, Edwina Margrave has returned to the cottage  where her parents died, eager to speak with the one person who might  shed light on the tragedy – the volatile landlady, Miss Thorn. But her  shocking revelations are not what Edwina expected! Enlist the aid of the  spirit world and evade the wrath of a disfigured beast as you explore  Margrave:
The Curse of the Severed Heart, a heart-breaking Hidden Object  Puzzle
Adventure game!

FIRST IMPRESSIONS
The game starts in one of my favourite ways – with vocals as well as music! The intro is nicely done, filling us in without need of narration, but with good voiceovers. The look and feel of the game at this stage is very ‘sixties’ to me.

SIGHTS & SOUNDS
The standard of graphics changes marked at different points in the game. The opening segments are nicely painted and although a little misty, clear. The HOPs are also very clear and brightly lit , this time photo-realistic. It is the location graphics I have a problem with, they’re awful. Very grainy, crowded and over-detailed, dark and confusing.

Very sad, because the close ups are so good! Well, except the early close ups of Miss Thorn’s face, who seems to be suffering some kind of eye infection. This is not a game with much in the way of movement. The scenes are mostly static, with shutter shots replacing animation. It would have been a much lovelier game with it.

The sounds are great. Voiceovers wonderful, although no attempt at lip sync. The background noise is good, and the music very evocative.

WHAT’S HAPPENING?
Edwina returns to the place of her childhood to meet with the one person who might know something about the death of her parents, back when she was a young child.  This is a sequel to two previous Margrave games, which I have not played, but which seem not especially necessary to this story, although it does seem a little patchy to begin with.

Edwina has the gift of magic, and Miss Thorn soon discovers that she (Edwina) may be able to help with the removal of the Shadowlocks, which are keeping souls locked up. But Miss Thorn is not being entirely honest with Edwina...

GAMEPLAY
This is primarily a HOP game. There are unique mini-games that are a part of the particular style of this game, and a number of easy puzzles, but for the most part, we progress through the use of HOP scenes. These are inanimate and the item lists do not require interaction, but they are attractive, clear and well lit, even in dark locations. They are also more difficult than most, partly because some items are small, but mostly because they are cleverly blended in.

The specific mini-games are two types. One is the familiar one of collecting items from a recipe to perform a spell and there are quite a few of them. As well, cryptic clues as to what you will need to progress are given each time you find and play a record. The unique aspect of this game, and it is very appealing, is a mini-game of “Dream Cards”. This cute little bit of magic allows you to discern a soul’s true name, and consists of matching sides of playing cards that are marked with symbols. It is a little tricky to explain. But it is a logic game that increases in difficulty each time you played it, and the final one was so complex, I cheated and looked at the walkthrough to get the first card in the formation.

Instead of a journal, you have a “Keepsakes” inventory, which holds newspaper clippings, cryptic clues, etc. The hint offers you a next step option. There is no map. There is a lot of to and fro in this game, and it is easy to get lost, so mark your bearings well. *grin* There are 2 modes of difficulty, but the only real change is the length of the hint refill.

COMBINED IMPACT
I was surprised at how much I enjoyed this game and it’s quirky nature. It is worth noting that at first it seems sweeter and cuter than it turns out to be. It is also longer than I remembered it. But perhaps that is because this time, I refused to skip those tricky “Dream Card” puzzles.

I loved this one.  I could have sworn that I'd done a review of it!

Yes, it is a good game. I enjoyed playing it, but am still confused about the connection of the cursed heart to her parents' death etc. Never mind, gameplay was excellent.

Y'know, I'd try to explain it, but I don't remember in the slightest!  I haven't played it since it came out!

That was 2 years ago!

Still, it must be getting close to that with some of my games too.

When I started to play this, I could remember only the first chapter, and thought it WAS the only chapter! So the game seemed very long to me this time round.
Sponsored content