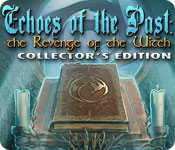 Save the kingdom of Orion in Echoes of the Past: The Revenge of the Witch!  Once again black powers have seized the land and this time the witch is more determined than ever to take her revenge on you. The entire city is gripped by fear and it's up to you to save them, and yourself.  Exorcize the evil and defeat the witch once and for all!

Re: Echoes of the Past 4: The Revenge of the Witch

After playing, and complaining, about four games in this series, I’ve come to the conclusion that the chunky grainy graphics must simply be what the game designers want. Personally, I think it looks ugly and sometimes makes HOs difficult to see, but I guess there’s no help for it.

It is just as well the series have some excellent and unique features to make up for it. Things I particularly noted in this game:

HO SCENES
The HO scenes in this game are really imaginative and clever. A variety of multiple items, standard lists, misplaced items and fragmented objects are not only scattered throughout the game, but in several cases a combination of these will be used in one scene. Very cool.

On the downside, each HO (and there are lots of them) is visited 3 times, and that is just too much of a good thing.

PUZZLES
There are some really original puzzles, and again a lot of them. Some are repeated, but increase in difficulty each time. The level of difficulty varies. I used the skip button more than I like to, but that was more impatience and tiredness, because...

LENGTH
The game goes on forever. There are 10 chapters, and I swear each one of them seemed to be taking an hour. This involves an enormous amount of to and fro, as all areas remain active throughout. There are usually too many items in inventory, and most of the time only the last one you pick up has somewhere to go, and it’s where you just were.

HINT
Hint gives you a picture of where you need to be. Very good. Unfortunately, you can’t use it to jump to that place. Which is a pity, because there is no map and this game really needs one so you can get around.


There are NO wallpapers or concept art in the extras! Now that’s a first. Instead we have:

A ‘GAME DESIGNER’, which from what I can grasp of it (not much, I didn’t understand the puzzle in the game either), allows you to create unique matches for the particular puzzle it relates to.

In a word, repetitive.

There were 4 HOs, which we visited 3 times each. There were variations of the Tangram puzzles which we played 6 times. We had 5 magic potions to progress through the chapter, which we acquired in almost the same way each time. There were, however, other things to do besides, and some of them were quite interesting.

The game took me roughly an hour, but I skipped most of the Tangram puzzles. By contrast, the main game took me 5 hours.

The replayable mini-games include the best and most original, and for that and the SG I think the CE is worth the $.

I Recommend This Game