Available at:
Big Fish for PC and Mac
GameHouse
iWin 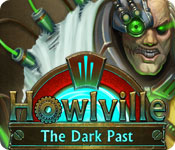 Discover the secret of Rachel's past in Howlville: The Dark Past! Many years ago an artifact was found in a mine near the small town of Howlville.  The government asked Dr. Joseph and a group of scientists to examine it. Something went wrong and the experiments were halted and classified. The town closed off. Since then nobody knows what happened to Dr. Joseph. Fifteen years later his daughter Rachel is on the verge of solving the mystery, but somebody is doing everything possible to keep her from succeeding. Help find Rachel's father and save the world from the looming catastrophe!

Re: Howlville: The Dark Past

All The Right Ingredients, But...

Somehow, this game just doesn’t pull it off. And it’s a shame, because the developers have clearly put a lot of thought into it.

Howlville is a HO Adventure, there are plenty of MINI-PUZZLES, and quite a few MINI-GAMES, offering an interesting VARIETY, and some were REALLY CLEVER, but they are second to the HO SCENES.

The HO SCENES are LIST HOS, some interactive, some not. Some also include mini-puzzles. They are frequent, about 2 HOS to a LOCATION. They are WELL-DRAWN, CLEAR, REALISTIC & DETAILED. But they are not always easy. Many items are HIDDEN very CLEVERLY. They do not repeat.

The game is a “NO RETREAT” kind of ADVENTURE. Once you have finished with the 2 – 3 LOCATIONS in the immediate area, you cannot go back to them. This saves a lot of backtracking, creates a more linear game and makes a MAP UNNECESSARY, but I did not find it any easier for that. I used more HINTS than I managed to collect, which is VERY unusual for me. COLLECTIBLE LIGHT BULBS give you extra hints, which can be used outside of the HOS.

The STORY is (again) trying to discover the whereabouts of your MISSING FATHER, and is a SCI-FI adventure. Daddy was a SCIENTIST working on something that got out of control so the whole place was quarantined. Your obsession with finding him put you in a MENTAL ASYLUM, and you have just now ESCAPED and made your way to the site of Dad’s disappearance.

As far as I’m concerned this is all GOOD STUFF, and should have maintained my interest without effort, but the game didn’t. It didn’t refer back to the story elements enough, so a lot of the time I was just playing for the sake of it, NOT INVOLVED and NOT FOLLOWING THE STORY. I also think VOICEOVERS would have helped, there was quite good MUSIC but little else.

The final problem in terms of involvement is that there are CHARACTERS & MONSTERS whose presence really isn’t explained. They would have been much more exciting if we had some idea where this was all going.

The STORY is CLARIFIED at the end of the game, but of course, that’s too late in the proceedings.

So, a game with MANY GOOD FEATURES, but lacking the FUN FACTOR. If you’re into HO ADVENTURES, and a not much of a fan of HARD PUZZLES, this is probably worth a try.