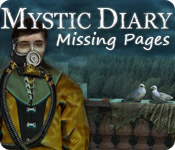 Stop a wicked magician from becoming immortal thus causing an imbalance and destroying the world. Follow cryptic clues and avoid elaborate traps to find your magician brother hiding deep within a Victorian-era castle and prevent him from using the Mystic Diary to build an evil machine to gain eternal life. Embark on an adventure in the world of magic and mystery in this hidden object puzzle adventure!

This game starts out well. There is no special intro before the main menu, but it is dark and eerie and draped in music and sounds of the most ominous portent. Intro to the game itself is intriguing, with one magician brother seeing trouble for not-so-magical brother in his crystal ball. This game follows the formula set down by the other two Mystic Diary games, as well as being a loosely defined sequel of both games. In fact, the story in this one is EXACTLY the same as the first. We must rescue our brother from his own mad plans, and find some way of warding off the evil he unleashes.

This time he enacts his foolishness in a gothic castle, which you get to explore in order to find the mystic diary and save your brother. The story is not really present for most of the game, as you just keep moving forward, helping spirits and occasional animated objects as you can. Some magical objects and individuals direct the action of your quest and you need to be constantly checking your diary for the information they have given you.

The game’s graphics are ho hum, not actually bad, but not up to today’s standards. Everything is visible though, without squinting. I like the music, it is a bit creepy without being over the top. There are no voiceovers, and apart from thunder when outside, ambient sound is at a minimum.

The game play is straight forward HOPA. The mini-games and HOPs are evenly balanced, with each HOP scene visited twice. The first time there is an interactive word list, the second is a search for multiples. The puzzles remained doable for most of the game, but I found myself having to skip the last few. The skip is very long, so this was disappointing. It made the finish of the game an anti-climax.

Hint also took a long time to refill, and it showed only where an inventory item could be used, so if you didn’t have the right item, or had not yet accessed the right scene, you received no help at all. Nearing the end, I had to use the walkthrough.

In all, an average game, nothing memorable about it, but not bad either. I found the time passed very quickly while I played, so it’s obviously absorbing. That’s good enough for me.