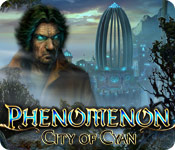 Help Monica uncover the secrets and tragedies of her childhood in Phenomenon: City of Cyan!  20 years ago a dangerous experiment destroyed most of Cyan City and turned many of the citizens into strange creatures. Explore the deserted city, overcome supernatural enemies, and find powerful allies on your quest to find out what happened to Monica’s parents in this fantastic Hidden Object Puzzle Adventure game.

This is wonderful! The graphics are gorgeous which always attracts me to a game. There is only one screen option which appears as a Wide screen on my computer. There are Hints and a Strategy Guide is included. I played in "Casual" mode but there are one or two other options. This game has Voice Over. Mini games are different and new in the Demo. later there may be some familiar ones but if not, that's fine with me! There are also minis within the Hidden Object scenes which I very much enjoyed. A Task List is included underneath the Hint button. Hints work both in the HOS and outside of them. If you are lost, use a Hint to find the way. There is also a Map.

This game is unique as well as great eye candy. A woman did an experiment which failed and destroyed a city rendering it's inhabitants as strange glowing ghosts. twenty years later her daughter returns to the city to find the parents she lost there. The daughter wears a pendant placed on her by her Mother years before. The pendant protects her from the ghosts. Help the girl find her lost Mother and save the city.

This game has all the beauty of a CE as well as a SG and is a regular priced game at BFG. I find it to be a great bargain and have purchased it. I score it 4 out of 5 Stars only because no game is perfect (and I have not yet gone beyond the Demo) but this one is close!
genkicoll

Ooo, very tempting! Thanks for the great info you've been adding to the site, Brib

How Could I Have Forgotten This One? It makes every game we’ve been so excited about over the last year look staid and ordinary.

City Of Cyan is different on so many fronts, it’s hard to encompass them all, but every HOs and every puzzle is by far more inventive and unique than we’ve seen anywhere else.

Obviously, no competing developers have played this game or we’d have seen this sort of thing elsewhere by now. Two examples from early in the game:

The graphics are really special too, even taking in the year’s worth of improvements. The inhabitants? Spirits? Survivors? are depicted beautifully and cleverly. There is a very high level of voiceover content, and again, there’s quality here as well as quantity. There is something shining and new at every turn. You get the idea.

The story is not entirely unfamiliar. We are called back to the town of our youth, where our parents ‘died’, only to discover maybe they didn’t die after all. There’s magic and dubious science involved, and more questions than answers. The end came abruptly, leaving  me a little unsure how to interpret it, but I’ve learned to live with that.

Bottom line? If you don’t already own this game, put it on your must have list – you won’t be disappointed.