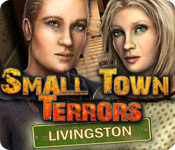 Your family is missing and the town is in chaos in Small Town Terrors: Livingston! Search for your family, uncover the evil that has enveloped the town, and escape with your life in this mystifying Hidden Object Puzzle Adventure game. Explore abandoned buildings and search for helpful items as you try to piece together what has happened to the town. Find your family before it’s too late in Small Town Terrors: Livingston!

A Little Sleeper On My Desktop ****

I never intended to buy this game because I was not impressed with the trial, but in a buying frenzy one day, I bought it to fill a punchcard, and only now have got around to playing it. And I must say, first, the trial doesn’t do it credit, and two, it is no earth shaker.

But it is definitely gripping. I started this while I was waiting for the sequel to download (that completely bowled me over in the trial), and then couldn’t bring myself to leave this one to go and play it until I was done.

It’s kind of a weird game, as others have noted.

Each chapter has its own dominant colour, which looked ugly and annoying in the walkthrough, but actually added to the atmosphere, giving it a sense of alien weirdness – to the extent that you noticed them at all. I completely forgot about them. The graphics themselves were quite well done – very gritty, and a lot of floating dust motes.

The music and most especially the background sounds were cree...eepy and again, weird.

You must collect health packs to complete some specifically difficult tasks, such as kicking a door in. These were hidden about like any other object. If you’ve ever played classic adventure games the concept will be familiar to you. Except you don’t have to kill the zombie in order to get the goodies.

Yes, there were zombies (ugh), but they were brainless and couldn’t open doors, so you are reasonably safe to get on with the business of finding your husband and daughter before they become victims too.

In terms of gameplay outside these little quirks, the game is pretty standard. Plenty of HOs and puzzles, none too too hard. I was too busy sorting out the plot and figuring my next move to critique them.

Just what is the cause of this terrible plague in the small town of Livingston? Well, plenty of theories are mentioned, but even at the completion of the game I’m not entirely sure. That is probably my only beef with the game.

A much much better game than I had originally expected.