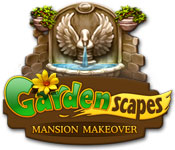 Welcome back to Gardenscapes! Having restored the garden to its beauty and grandeur, it’s high time to have some guests over to show off! Thankfully, the mansion has a spacious hall for everyone to gather. The only problem is that the hall is in quite a dilapidated state: the wallpaper is curling and peeled, the fireplace cold and broken, and heaps of old newspapers lie scattered about. It’s time to roll up the old sleeves once more, and with the heroic assistance of Austin the butler, turn the hall into a masterpiece!

I loved the first game! I hope that BFG will get it but maybe not. It looks like another fun game with great graphics and enjoyable decorating. It's bound to be a Winner even at the CE price!
genkicoll

I love the first one, too, so I was REALLY happy to see that this had finally been released! Most likely BF will only get the standard edition - that's what they did with Farmscapes, after all.
_________________
Never be a prisoner of your past.
It was just a lesson, not a life sentence.

BFG has offered this today as a Soft Release. To find it you may need to scroll down a little on the Home page. it is underneath Today's game. BFG is not offering the CE and this game is not designated as SE either. I just DL'd it and am about to play the demo. I really loved the original game!
genkicoll

I noticed! I'm truly shocked that they made it a soft release!

As for the CE-SE issue, they did the same thing with Farmscapes (also by Playrix). They say it's because they (BF) don't deem the extra content worth the extra price, but I don't believe that for a second. It's all in the contracts they have with the companies.

This game is every bit as good as the first! This is just a well crafted, delightful series. I don't usually care for this kind of game but I can't get enough and both games are lengthy. Not worth the extra content? Most extra content in CEs is advertising except for the extra gameplay which is often short so I am surprised they would claim that. They should be ashamed. yes, I do believe it is all in the contract that BFG has with the developer. I am not certain but I think that BFG may have two kinds of contracts, one for individual games and another which is offered to a Dev for a number of games or a set of games (original and it's sequels, for example).
genkicoll