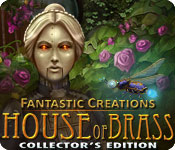 Escape an underground vault of clockwork wonders with the help of its mysterious and eccentric inventor in Fantastic Creations: House of Brass! Manipulate the steam-driven contraptions expertly, and listen to Edwin Q. Cogglethorpe’s helpful advice. Reactivate the house floor by floor until you reach the top. Will you survive the treacherous malfunctioning devices and make it back to the world above? Find out in Fantastic Creations: House of Brass!

Re: Fantastic Creations: House of Brass

BASED ON COMPLETED (ON 3RD TRY) GAME

It’s a very good STEAM PUNK PUZZLE ADVENTURE where some of the puzzles are HOS of an unusual type.

We find ourselves in a most unusual HAUNTED HOUSE, with NO GHOSTS, but where ROBOTS roam, causing havoc, and attempting to PREVENT us from LEAVING. Through the ingenious devices of the ARCHITECT, an eccentric but visionary INVENTOR, we can receive his help along the way and thwart the intentions of the out of control robot, GWEN.

The ARTWORK is TOP QUALITY, well rendered and imaginatively conceived. The ideas behind the gadgets are very clever. Visually, this game is a treat, not only for its beauty but also for its originality – the eye candy is of a more mechanical sort. SOUND is very quiet, very little AMBIENT noise, not even steam/engines a lot of the time. The MUSIC is quite upbeat and pleasant.

There are VOICEOVERS, specifically, Cogglethorpe (the inventor), which are REALLY WELL DONE. It must be said, though, he could drive you nuts with his SMUG ARROGANT CONDENSION.

The GAMEPLAY is MOSTLY PUZZLES, wonderfully designed, both original and familiar. Some of these puzzles are REPEATED, but with greater difficulty as we go. Even the simplest puzzles in this game require some BRAIN POWER. I had to SKIP (SLOW) many.

The HO SCENES are different. They are twists on MULTIPLES OF where we must find “12 square shaped objects” or 12 “containers”. They require greater MENTAL EXERCISE than the average HO, and I like them.

The JOURNAL is of little assistance in sorting out where next to go, and there is NO MAP, but HINT offers CRYPTIC REMARKS (these fireflies always seem to escape). I had to resort to the WALKTHROUGH in order to finish this game, after my third attempt stalled again.

I’ll probably never play this game again, because it was very frustrating for me, but I do believe it is a very well put together game that would entertain and challenge most players.