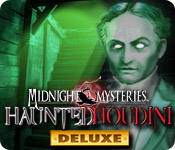 When Houdini’s promises of contact from beyond go unkept, his wife comes to you in a final plea to unravel his mysterious passing in Midnight Mysteries: Haunted Houdini Deluxe!

When he promised his wife that he would try to reach her from the  afterlife, it was seen as the ultimate stunt   But after years of  séances, Bess was never able to reach Harry in this life or the next,  and her spirit has come to you in a final plea to reunite her with her  partner!

GameHouse is now offering this as a Premium Edition, and is also available at iWin as a Collector's Edition.
_________________
Never be a prisoner of your past.
It was just a lesson, not a life sentence.

FIRST IMPRESSIONS
I adore this series, with its unique style in visuals and the complex and compelling stories. I even love the raven. This game differs somewhat from the norm, and is even better than the others (which were all exceptional). It has been released as a “Deluxe” Edition, so the extras – the bling! – you might say, are here at a standard edition price. It’s a great pity that this style of edition didn’t take off.


DELUXE BLING! (Big Fish Games)
Quite a good package here. There is an in-game Strategy Guide (which is done differently by this developer, and is far easier to see and understand). There are 2 collectibles. The ravens (52) are extra hints, and clovers (40 out of 70 are needed to unlock the unlimited mode). In this extra, you get to revisit HOPs from the game, and find the full list of EVERY item in them. You are rated by time taken, for 3 awards (gold silver bronze). There are also achievements. Not many, but a couple of them are interesting. Clovers can be found all over the place, including HOP scenes, and sometimes are very small and rudimentary.

SIGHTS & SOUNDS
Beautiful graphics. I love the way these games are put together. I have seen no game ever that has the same look and feel. Cut-scenes, from the very first, are amazing electrifying and occasionally startling. I lost count how many times I jumped and flinched. And I’ve played the half a dozen times! The game really is quite creepy, it’s just that gameplay is so intriguing, I get a little ‘lost to the world’. I also love the convincing details of the widely varying locations and epochs.

The music, too, is unique and has a wonderful creepy tone from time to time. I loved the special effects. No voiceovers.

WHAT’S HAPPENING
Houdini was well known for having a thing about fake mediums and psychics. He debunked a lot of very unhappy people. He made a pact with his wife that if there really was a way to contact the living after his death, he would contact her and they would use a code to make sure it was really him. All this is true, at least, part of the Houdini legend.

The game starts with Mrs Houdini’s ghost seeking your help to find Harry’s, because even after her own death she has been unable to contact him. The story is, Houdini was murdered, and you must travel through time and space to visit those people who he knew who might want him dead. It is a great departure from the usual fare offered in HOPA’s but still very much in keeping with this series.

MAKING PROGRESS
An emphasis on HOPs, each an interactive list, and visited twice. Puzzles are okay, there is not too many of them. The adventure part is helped along by a perhaps too helpful hint that tells you exactly what to do next. There is no map. Skip, is pretty slow if you want to give up on those puzzles.

CRUX OF THE MATTER
I love every Midnight Mystery produced, and this one just gives me goose bumps!