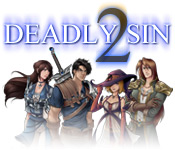 The heiress to the Empire has been kidnapped and you must save her. Living in the shadow of your father, whose heroism became the stuff of legends, you are an Imperial Soldier forging your own path. Step out of your father's shadow and face your destiny in this action-packed Strategy game. The doors of fate are cracked open, and you are thrust into the middle of a dangerous political plot in Deadly Sin 2: Shining Faith!