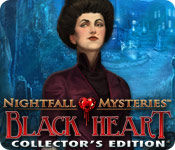 Stop the evil Vansig family before they point their vengeful wrath at your friend Christine in Nightfall Mysteries: Black Heart! Just as Viggo and Christine believed themselves free from the shackles of the Vansig family, an enemy they thought dead returns to kidnap Viggo, destroying the newfound peace of the lovers. Powerless to save Viggo by herself, Christine has called upon your help in Nightfall Mysteries: Black Heart!

SPIDER WARNING: There are multiple spiders skittering across a wall at one point, and we have to mess with a black widow soon after. Later are even more spiders to deal with, so if you're an anacrophobe, might want to pass on this one!

Also, unlike the first two games, this one deals with otherworldly elements which may be offensive to some.

In game #1 and in this game, we play as ourselves -- a secondary party -- whereas in game #2, we play as Christine. Black Heart does contain the same characters as in the first two games, so this is a continuing storyline.

We have three game modes to choose from -- Casual, Advanced, and Extreme -- and you can change the difficulty at any time during gameplay

There are separate sliders for Music, Sound, and Dialog, plus three different options for the cursor (that's a first!) and full-screen or widescreen mode.

The HINT button is refillable, and the time it takes depends on which difficulty level you choose. Using a hint during the adventure portion will either circle an area of interest on the scene, or tell you there's nothing you can do there right now.

The hidden object scenes are not terribly hard (no tiny or dark items) and are lightly interactive. Even in Easy mode, there are no sparkles indicating where these areas are, but your cursor will change to a hand when you mouse-over. There is a misclick penalty, regardless of which difficulty you are playing on. Scenes do repeat (eventually) and the to-find lists are random, so you may end up finding when you go back to a scene.

Mini-games are skippable (assuming that you're not playing on Extreme mode.)

Something I really appreaciate about this game is that when you try to use an item in the wrong place, it will explain WHY it won't work. I LOVE it when they do that! Something else that impressed me is that -- while it is a common theme in these games -- when we have to scare some animals, the devs found a way to do it without being aggressive or cruel. ie. Throwing a rock at a bird? Not in this game!

As with the second game, Asylum Conspiracy, we find audio tapes throughout the game, which give us extra story to enjoy. The tapes can be accessed via the JOURNAL, which has multiple tabs: Clues, Audio Tapes, Map, and if you have the Collector's Edition, Collectables. The Clues portion shows a bit of extra story (beware, there are a few unsolicited hints) and puzzle clues. The MAP shows your current location and areas of interest, but does not have the "jump-to" function. Still, it will show you the name of each location so that's helpful.

There is more of a focus on the adventure gameplay in this third edition. Many times I couldn't figure out what I was supposed to be doing because I missed that there was something I needed to pick up on a zoom-in scene. They make good use of those scenes, making them multi-purpose. Just remember that the map is very useful when you get stuck!

Just a note that while in the first two game the entire map was accessible at all times, it is not so with this one. Once you leave the "intro" area, there's no way back. Be sure to collect the mask in that area before you leave if you have the CE! There are 38 locations in the main game, which doesn't include the intro area.

Sadly, you can't go back and collect any masks and/or cassette tapes you may have missed during gameplay :(

The Bonus Chapter takes up right where the main game ends, with seven locations to explore - one revamped, and six brand new. Very interesting that we get one new piece of information that relates to the last game (Asylum Conspiracy) during this bonus, via a note written by Victor before game #2 starts.

Basically, the bonus sets us up for a new story arc in the Nightfall series.

I played this game on the easiest mode, and by FAR this is one of the most difficult IHOG's I've ever played. The hints are well nigh useless, as it will point out an area you need to attend to, and if you hit it again to see what you need to do there, it closes the zoom-in scene and shows you that you need to do something there (again

) Even on easiest mode, I only saw a couple of sparkles throughout the entire time I played the game. I am very glad to have the CE of this one, as this is the first time I've ever NEEDED a strategy guide, and it was awfully nice to have it right there. The rest of the bonus content is pretty good, but not outstanding.

What a long and difficult game! If you enjoy a challenge, I'm betting you'll love this one