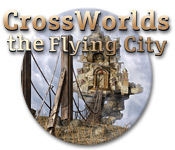 Monica and her father, Professor Dumbdore, have invented a unique device, a teleporter that enables traveling though parallel worlds! Mysteriously,  Monica’s father disappears and it’s up to her to track him down!  Investigate the different worlds and meet interesting characters as you  track down Monica’s father in Crossworlds: The Flying City, an exciting Hidden Object game.

FIRST IMPRESSIONS
This is a reasonably old game, so I was not surprised by the comic strip style opening, nor the lack of voiceovers. The intro soon has you ready for an adventure across multiple worlds, with the minimum of backstory.

SIGHTS & SOUNDS
The graphics, other than the cut scenes, are quite good. Very much in the realistic style, and generally bright and clear enough to see all you need to. There is some blurring of the edges, but not as much as you might expect. The music in the intro was very different and interesting, and in the rest of the game fairly unobtrusive. I must say the environmental sounds were pretty inconspicuous.

WHAT’S HAPPENING?
Your father has finally put together the transporter you and he have been working on, and while you’re asleep, he tries it out. Something has gone terribly wrong; he has left a note saying that he is being chased by something, and that you must not follow him. So of course you do. The world you find yourself in is Roboworld. A depressing junkyard of rusting and defunct machines. You do find some functional robots, and from them you learn the history of this world. There are some interactions with the robots that are really quite amusing. Your father seems to have become irrelevant, and is not mentioned again.

GAMEPLAY
The gameplay is a bit interesting. This is a strictly HOP game. No puzzles at all, and limited adventure activity which is kept within a small area of action. There is no hint, no map and the “notebook” keeps only codes picked up and objectives. Still, nothing is super-hard, and a tour of recently played areas soon turns up the solution.

The HOPs are standard word lists. Some have interaction required, but these items are not indicated on the list. There is little animation in any part of the game, and so the HOP scenes do feel a little flat. The items are pasted into the scene, something I don’t normally like, but it is okay here. They are sometimes hard to find because they are partially hidden by other objects, and sometimes they are not their full size, but they are rarely actually tiny. The scenes are well lit and as clear as the graphics allow.

Expect to visit an HOP scene up to 3 times. This is where it is interesting. On returning to a scene, you will find the objects have been moved around. Some of the objects you collected will be back again, but in different places! And some new ones will have been added. This simple trick made it quite fun to return to a previous scene.

COMBINED IMPACT
It is hard to decide just how I feel about this game. I like the trick with the HOs, but otherwise I found it dreary without having the virtue of a specifically creepy or dangerous atmosphere. It depends, too, on what the other worlds might be like. But I wouldn’t want to be spending a few hours wandering around Roboworld. It was just too depressing, despite the occasional laugh.

Still, it is an excellent HOG for those who want more than unconnected HOPs, but don’t want to be burdened with too much adventure gameplay or headaches from puzzles.

This game kinda creeped me out a bit when, first of all it called me by name - not my email name, not my bfg forum nick, my actual first name, and then, when I was clicking all over this specific area, where hint said the last item was, it told me to "give the mouse a break", when I was clicking on a mouse!

Wow, I could have sworn that I'd done a review of this when I played it oh-so-long ago!  I really disliked the beginning, and wouldn't have continued the game, except that friends were extolling the virtues of the game.

I'm glad I stuck with it.  I liked Roboworld, as it reminded me of the starkness we experienced in Lost in the City.  From there the places seemed more and more magical.  Of course, it WAS 2011 when I last played, but I enjoyed it much more than I thought I would!
_________________
Never be a prisoner of your past.
It was just a lesson, not a life sentence.