I love the rain... Have I ever mentioned that?  The steady pitter-patter of raindrops is so very relaxing, and the gray of the sky seems to intensify the colors of the world.  The green of the grass and the trees, the brilliant colors of the changing leafs (or 'leaves' if you prefer)... just beautiful

We have a couple of pet bunnies that someone released

that have been hanging around our neighborhood, in about a 3-block area.  As of Friday they seem to have decided that staying under my house with the feral mama kitty would be a good idea!  Very cute to see them grazing in the yard when I come home from work, but I do hope that they are the same sex... I don't think that having dozens of wild bunnies living under my place would be a good idea

We're soul mates Genki!!!  I LOVE the rain and the wind.  I love to be at the beach when there is a storm.  The colors are more brilliant and the air seems to be much fresher after a storm.

I think you may have lots of bunnies before long!!!

Well, the expected (temporary) flooding doesn't seem to have happened, but...

I got a phone call from my parents last night, telling me that a 35-ft blue spruce in their front yard had fallen

If it had fallen straight, it would have landed directly on the house, right where my dad was sitting.  If it had fallen ANY other direction, it would have decimated their beautiful rhododendron garden.  As it is it fell at a perfect angle, one that minimized the damage, falling in a relatively empty area, with the top 8 feet (or so) hitting the deck, but NOT doing any damage!

What a wonderful stroke of luck! Whew~

I really wanted to add pictures, but the memory card in my camera has died

Indeed!  It could have been disastrous, and we're all breathing a sigh of relief at this point... and I have pictures!  Mom had her camera handy 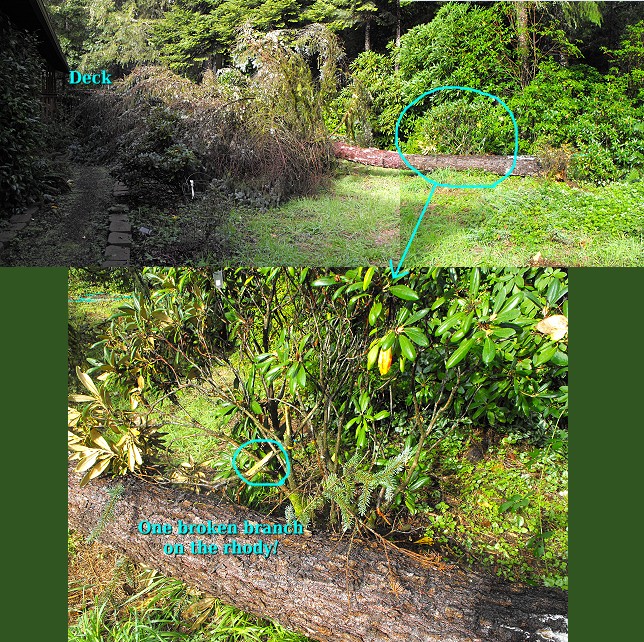 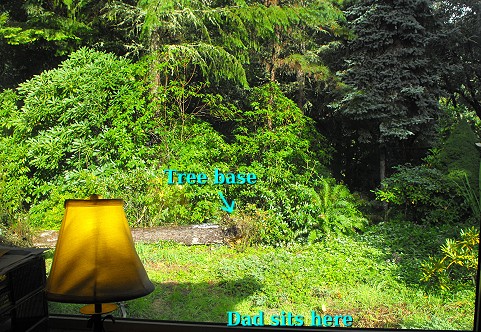 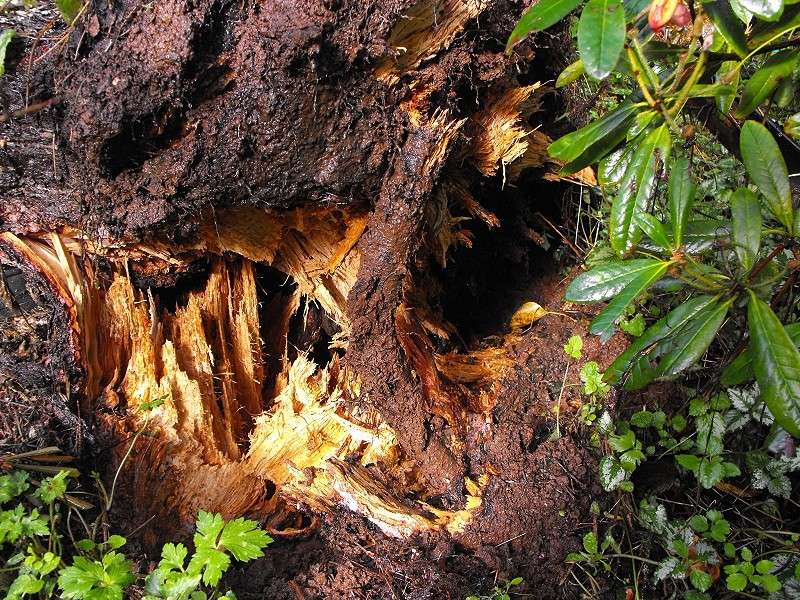 Oh my goodness.  That is SO scary.  Look at the bottom of that trunk!!  Was this due to the constant rain??
genkicoll

We had heavy rain and wind over the weekend, but the tree guy says the the spruce was diseased.  It had a large mushroom-like growth there at the base (which is cut off in the picture) that is the indication of a diseased tree.  I'm just SO thankful that not only was no one hurt, but no property was damaged, either!
_________________
Never be a prisoner of your past.
It was just a lesson, not a life sentence.

So glad the tree fell the way it did, genki.  Your parents, especially your Dad, must be very happy there was minimal damage.
genkicoll

Tired and a bit under the weather today, as I have been for the past week or two, and got quite the surprise this morning.  Walked out the front door, only to find that some sorry SOB hit my car in the parking lot of the story last night, then left without so much as a note!

We couldn't see the damage since it was dark out, but it's quite noticeable now!

I am also a bit under the weather--thanks to this crazy weather.

So sorry about your car

So sorry Genki.  Where was your car parked?? Any possibility of cameras?  I do hope you feel better.  You too luvtoread.
genkicoll

Probably not, the car was parked pretty far out in the parking lot... and we don't know which store it happened at! *sigh*

So sorry to hear that, Genki. Thank goodness it's relatively minor but how frustrating!!
genkicoll

The Weather has been really weird this year.  Usually by October, we've lost the last of the heat of summer and move quickly into freezing temps.  This fall has been so warm that we didn't even remove the air conditioners until right before Halloween!

Until a few days ago, it was warm for November, and just in the past few days we've finally hit the cold, and it's colder than usual.  We went from lows in the 40's to 32 (right at freezing) the next day... and the day after we went to lows in the low 20's (unusual in this area) and have stayed there!  Huh!

I wanted to give y'all a heads-up that the fan on my graphics card is making some lovely squeaking noises.  I don't think it's long for this world.  I do have an external fan blowing on my hard drive, but if the card's fan stops working, I think my computer will stop working.  Darn!  I have bad luck with computers!
_________________
Never be a prisoner of your past.
It was just a lesson, not a life sentence.

This weather is crazy!  Today it's 20 here, with a wind chill factor that's going to make it seem like 7 degrees.  Glad I'm warm and cozy in here, won't go out today for sure!

Damn cat wants to go out on the back porch, whining like a Porsche!  I may have to get off the computer and go into another room before she drives me mad!

Luvtoread and genki, hope you're both feeling better, and good luck with your car, genki.
genkicoll

My graphics card, Sable, but thank you!  I mentioned it so that people wouldn't worry if I disappear for a while.

So I just got a phone call.  Every single year for about four years we'd get a call at about this time of year to let us know that the landlord had decided NOT to sell the house that year.  After being up in the air on our stability home-wise, he's finally kicking us to the curb (so to speak.)  *sigh*  We have 'til June 1 to find a place to settle.  I'm grateful that we're getting plenty of notice, but do you know how much *stuff* you acquire after living in one place for over ten years?  A LOT!

This is going to be REALLY hard on us -- me with my teeter-tottering health, my husband with his bad back, and two autistic kids that will still be in school at the time

I'll still be keeping the site up, but this is seriously going to cut into my game time!

WHAT?!? Oh no, so sorry to hear this. Haunted or not, home is home and besides, the process of moving is like a fulltime job on its own!

Should I wish/hope that your landlord changes his mind, or is that just not gonna happen?
genkicoll

Pfft.  Yeah, it could happen

It wouldn't be the first time he changed his mind.  Still, with the economy on the upswing, I think he'll actually do it this year.

Now that you mention it, maybe the spooks will stay with the house and not follow this time!

Maybe you could have a sale,   sell off what you can--then leave everything else
behind except clothes,  beds and computers.

I was fortunate when I moved into this apartment last year.   I pretty much had nothing
cause I was too poor to afford to buy stuff.     That actually was a plus!!

But,  my sympathies to you.   We will keep updates on games for sale and what else
is going on in the gaming world if you get too busy.
genkicoll

I hope it doesn't come to that!  Thank you so much for offering!

Well it looks like I'll be able to get some gaming in tonight, after all... I'm sick!

Skip the song (spoiler) if you don't want to see cursing

We found out that the landlord's selling the house afternoon before last, and we got quite the surprise yesterday -- about 26 hours later.

I was on my way home from work when I got a phone call from my husband.

"The damned oven element exploded and caught fire!  I checked the elements and the oven before I turned it on, like always, I don't know what happened!  I turned it on, and before I could get to the next room, I heard a electrical whine and boom.  I opened up the oven and sparks shot out, the damn thing was on fire!  Scared the life out of me!"

You see this has happened before.  The first time the owner said it was out fault because we didn't have the tabs supporting the bottom element properly.  Regardless, he replaced the element.  We've always been careful since, but it happened again a year or two later, and we replaced it, ourselves.

THIS time he can't blame it on us... it's the UPPER element, which nothing has ever touched except the back of my poor husband's hand (such a bad burn, poor guy!

) and that was years ago!  The element was perfectly clean, my husband checked the oven before he turned it on (as always) and yet the element burned right through... towards the back, nowhere near where he burned his hand!

It's like the house is saying, "Yeah that's right

Even if the landlord changes his mind and decides not to sell the house (wouldn't be the first time,) we are leaving -- it's time, we can just feel it.  While it's stressful, this is really a good thing for us.  I look forward to seeing what the next few months holds for us!
_________________
Never be a prisoner of your past.
It was just a lesson, not a life sentence.

OMG what news!!! So very sorry to hear your husband's hand is burned. Hope it heals quickly. That landlord of yours better not give you guys a hard time -- maybe you should sue him, haha.
BTW I am sick too

and totally appreciate your song. Yes I feel plenty shitty as well. And overriding it all, a horrible horrible headache. I only left bed briefly but am off to it again.