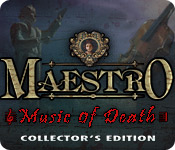 A mysterious illness has broken out and is causing an entire  village to age rapidly and die! Meanwhile, ominous music can be heard wafting through the air… Journey to the quarantined village and find the cause of the deadly disease in Maestro: Music of Death.  While you  search for the source, find a little girl, who is trapped in the town!  Master this Hidden Object Puzzle Adventure game and save the entire village! 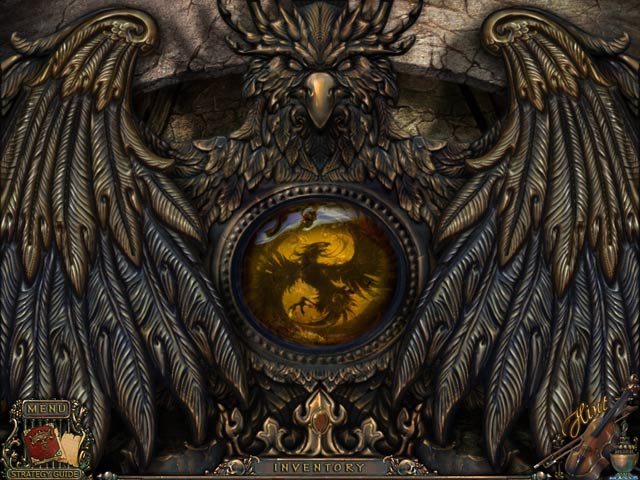 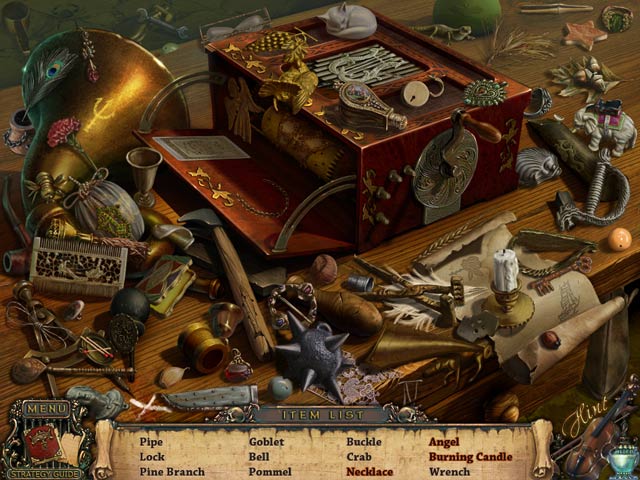 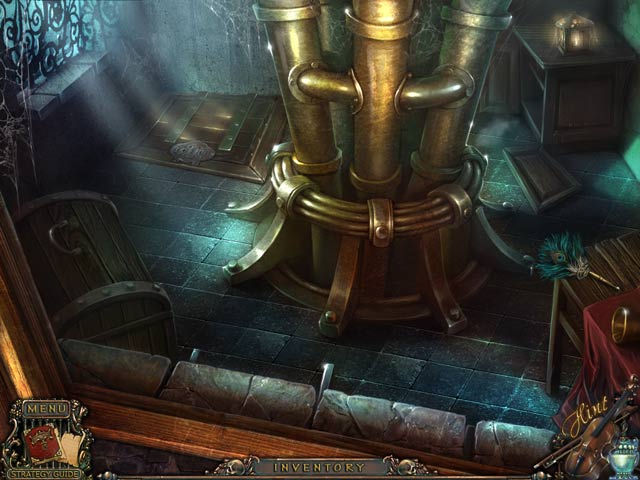 FIRST IMPRESSIONS
Having played this game several times, but not this year, I was surprised at how very different it is compared to today’s games. It is not the so called ‘dated’ pseudo-realistic games of even earlier, and it is released by ERS, and you can still see that in the graphics. But the whole atmosphere and feel for the game (in fact, the  whole series) is quite unusual for them.

SIGHTS & SOUNDS
The intro to Music Of Death, though it has decent quality graphics, is almost ugly. Not quite, this is ERS after all, but about as close as they can get. Roses bloom into skulls, the environment is dark and gloomy, the music is an irritating violin. But it works. This is a gloomy sort of game, the artwork reflects that, and some may find the graphics difficult to see. The use of voiceovers is limited and very good. Not all the music is that violin. *wink*

WHAT’S HAPPENING
You are returning to your part of Paris, but it is blocked off by soldiers, saying there is an epidemic aging everybody so fast they are dying in minutes. You meet a woman whose child is still in the town, and when you go back to the guards to argue her case, all the soldiers are dead. You make your way to the empty plague-ridden city, searching for the child.

MAKING PROGRESS
This is where this game really feels strange after the games of this year. It is so simple by comparison. The HOPs are many, word lists that are only occasionally interactive, and which are visited twice. There are a fair few puzzles, although not as many as the HOPs. They are very, very simple, although they do get harder as you go along.

The adventure side of the game is also simple and most will not have much trouble with it. However, with no map and no (useful) hint outside HOPs, there is a challenge here if you’ve been spoiling yourself with jump maps and hints.

There is a good journal, but you must keep far more in your head about what needs doing where than we’ve become used to. So while it may well be a reasonable game for a beginner to start on, it also makes a relaxing but not tedious game for intermediate players. Except for sentimental reasons, I can’t imagine this game appealing to the harder line experts.

FINAL VERDICT
I really enjoyed myself with this game. I found myself ‘getting back to basics’ in a comfortable amble for about 3-4 hours.


I Recommend This Game!
genkicoll

Options include separate sliders for Music and Sound, Full-screen and Custom Cursor. Choice of Regular or Expert Mode (can't be changed once you pick.)

A town has been quarantined due to a mysterious illness that is rapidly-aging and wiping out the residents.  You've been charged with investigating this deadly epidemic, and have been implored to find and save a townswoman's daughter... As soon as you can find a way into the city.

Our Journal tracks everything we learn, and also contains some additional story.

I really appreciate that the devs took the time to tell us why certain things wouldn't work.  Little things like telling us that we'd get wine all over ourselves, so "I guess I can't just smash it," really goes a long way with me!

There is no MAP, nor any form of instant-transport, but it felt like the devs tried to keep the backtracking down as much as possible.

Using a HINT during the adventure portion of the game will either point you at an area of interest or tell you there is nothing to do there.  There is no directional hint, and it would have been really handy, since there are sometimes exits that you're not aware of.  There's one scene late in the game that actually has TWO exits to the right, and it's not easy to see that this is the case, so that's a small gripe from me.

Hidden Object Scenes are your standard find-by-list, with items bordered in orange needing some kind of action before you can locate them.

The gameplay is semi-well-balanced, but tends more towards HOS than adventure.  The puzzles range anywhere from simple to moderate in difficulty, and were generally fun to do.

The graphics set a nice, creepy tone for the game, with the occasional macabre imagery.  No blood, but consider the storyline, and you'll understand what I'm talking about.  The sound effects were deliciously-chilling at times, so - being a dark & eerie fan - I really enjoyed the setting.

The extra chapter starts not long after the main game ends, and although it is not necessary in order to have a good ending, it does fill in some blanks and gives us an even better setup for game #2.  The gameplay seemed a little bit more HO-heavy than the rest of the game was.

This is a nicely-environmental, HO-heavy adventure that should take about four hours to complete if you include the bonus chapter.  It's creepy, sometimes chilling and gives us a nice lead-in to the second game, while still giving us a good ending for this installment.  Recommended to IHOG fans who enjoy a nice dark & eerie tale.
_________________
Never be a prisoner of your past.
It was just a lesson, not a life sentence.