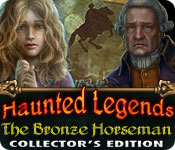 A small town lies devastated after being ravaged by a terrible  flood. The townsfolk hide away, whispering of the Bronze Horseman, who  has come to pass judgment on the wicked! Summoned by the town’s mayor,  it is your duty to investigate the mystery and find his son, who has  disappeared amidst the chaos. Help the small town using your Hidden  Object talents in Haunted Legends: The Bronze Horseman!

Options include separate sliders for Music and Sound, plus full-screen and custom cursor.  There are two difficulty levels -- Regular and Expert -- and this cannot be changed during gameplay.  The tutorial is optional if you're on Regular mode, and not available on Expert.  I of course chose Expert mode.

There is NO MAP.  In addition, HINTS refill at different rates depending on which mode of play you've chosen, but ARE NOT AVAILABLE during the adventure portion of the game.  No map and no hints... and that's OK, because the game is really not challenging enough to need them... at least not for this gamer.  If you do need some help, there is a link to a walkthrough in post #1 of this thread.

The journal not only collects info and gives story, but almost literally hands you the answers to puzzles.  I'm on expert mode, I would have liked to make that connection myself, thank you very much!

We collect 24 crystals during gameplay, but this is not a bonus -- it's necessary and part of the plot.  Don't worry, they're pretty much impossible to miss

, and they won't be cluttering up your inventory.  We have a pretty bookshelf to keep them on until they're needed.  Just click on the crystal in your taskbar to see the ones you've found.

We have blatant black-bar hints when we click on things, so if you don't want to know, try not to look

The hidden object scenes are frequent and interactive, with items listed in orange needing some kind of action before they can be found.  Scenes repeat.

The graphics are nice, albeit a bit misty, and I had the sound turned down, so I can't report on that.

SO, the above were my initial impressions of the game.  As I progressed I found a bit more of an adventure element to the game.  We're still inundated with HOS, but adding a bit more adventure was a definite plus for me.  I never got lost, BUT, those crystals that I said you can't miss?  Oh yeah, I missed two.  Now I have an excuse for one of them.  I was playing on expert and missed a hotspot.  The darned thing was hidden in a cupboard that I didn't notice!  The other, though...

Right in plain sight, I don't know how I missed it.  Seeing as how there are no hints during the adventure part, the walkthrough ended up being VERY useful, after all!

The journal it turns out only gave away the solution to the one puzzle early on.  The rest of the minis were doable, save one which I didn't understand.  By the time I figured out what was going on, I'd accidentally solved the puzzle!

The rest of them were solved with a bit of patience.

Truth time!  I blindly bought this game because I rather liked the first game, and at the time I had to have all of the games in a series -- One of those OCD, game-hoarder-type things, you understand

For the first 30 minutes or so of the game, I was only playing because I'd already bought it.  I was a little bit irritated at the amount of HOS and lack of challenge... and I certainly didn't care about Mr. Big-head Dwarf! (Seriously... his head is as big as his entire torso!)  Well, THAT part didn't change -- I've finished the game and still don't care about Mr. Big-head.  HOWEVER, I did come to truly enjoy the gameplay.  It's a nice game to relax with.  Surprisingly, I think I had more fun with it than with the first game!

The ending of the game was a bit abrupt, but it was still satisfying enough.  I'd like to know where the bonus chapter went, but not enough to buy the CE.

If you don't mind HO-heavy games, I recommend giving it a try

That Evil Dwarf SG Is Back!

I don’t consider this to be one of the best ERS games, and the series is not my favourite either, but this is still an ENJOYABLE & ENTERTAINING game.

VISUALLY, it is still APPEALING. Even though the AGE of the GRAPHICS makes them a bit FUZZY on my LARGE MONITOR, they look great, and the hand drawn effect creates a magical atmosphere. Being a HO GAME almost exclusively, the art is CLEAR & DETAILED.

HOs are INTERACTIVE LISTS, PUZZLES are LESS FREQUENT & FAIRLY EASY and, these days, they are quite WELL KNOWN. However, there is NO HINT at all outside HOS, and the JOURNAL keeps minimal information only. There is also NO MAP. So some challenge is provided.

There are COLLECTIBLE SOUL CRYSTALS scattered throughout the game.

The STORY is NOTHING SPECIAL, the mayor has called you in to investigate strange disappearances, including that of his nephew Michael. It doesn’t take us long to find out that that nasty dwarf SG, is behind the problems.

However, things are not always what they seem, and exactly what he is up to takes a long time to come to light.

I did enjoy this game, although it is not a STAND OUT.

My only real criticism is the one I seem always to be making about ERS games. The MUSIC is REPETITIOUS, and the VOICEOVER for the child is very GRATING.

There are better games out there, but this is still a great SUNDAY AFTERNOON game.