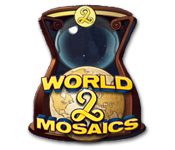 Return to World Mosaics 2, the puzzle adventure that takes you around the world! Having tracked the origins of the Sea People to the legendary city of Atlantis, the power of a magical hourglass has taken you back through time! Solve your way from the wonders of the Jurassic period, through the Dawn of Civilization, to the glorious Renaissance as you restore the hourglass of the Pelasgians and return to your own time in World Mosaics 2.