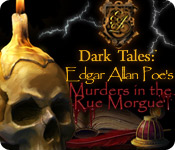 A dreadful murder and kidnapping has occurred in the Rue Morgue and only you can solve the dark crime! Follow the clues to find the killer and the missing family. Become the apprentice of the famed C. Auguste Dupin and solve the devious puzzles to find the hidden clues that will lead you to the monstrous murderer. Based on Edgar Allan Poe’s most acclaimed  murder mystery, Dark Tales: Edgar Allan Poe’s Murder in the Rue Morgue  is a fantastic Hidden Object game full of suspense and excitement.

Back online after 5 years away, almost my first experience of HOPA style games was the Dark Tales series, and it was love at first sight. 18 months and 300 games later, I still count M. Dupin as the best character in any game I’ve played. But it takes more than my crush on M. Dupin to get five stars from me.

Based on Edgar Allan Poe’s story, this game has real appeal to horror and literature fans alike. Told as it is in M. Dupin’s “voice” (not literally, he doesn’t get an actual voice until “Premature Burial”, but I can hear him all the same), we are led through the process of the investigation each step of the way. This means the game is very story driven, with almost no choice of direction, and very little of adventure-like gameplay.

Although it doesn’t feel like it, this game is almost exclusively HOS with a few easy puzzles. The HOS, by the way, are amazingly well done for the time this was produced (2009), with beautiful graphics, much more vibrant than the pastels for which ERS are famous now, that can still hold their own against most games.

Despite, as I said, Dupin’s control of play movement, he’s not much of a one for hand holding. The HOS are interactive, but there is no indication on the list, you have to figure it out yourself. The items are hard to find not because they are in junk piles but because they are cleverly disguised. Likewise, there is NO, yes I said NO hint at all outside of HO scenes. Puzzles, though simple, come without instructions but, thankfully, with a skip button. It took me 10 minutes of fruitless searching for a code to realise one such game was a simple matching pairs puzzle!
Each HOS is visited just the once, but some locations have up to 4 HOS, which sometimes interact between themselves!

The journal is a treat in itself, not so much for its usefulness, which is debatable, but for the notes made about M. Dupin and the art of investigation. It all adds up to a delightful atmosphere of the macabre without being at all gruesome. Having finished it I am sure that, like me, you will not want to be without the rest of the Dark Tales series... They get even better from here.