Available at:
Big Fish for PC and MAC 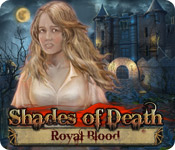 After your father dies, your sister Violet requests your help
at the Family Castle. After arriving, things seem to be in disarray.
Explore the castle and help Violet get to the bottom of a dark mystery
in Shades of Death: Royal Blood. Use your
Hidden Object Puzzle Adventure skills to explore the grounds and solve
tricky puzzles. Discover what had frightened your father and find the
truth behind his death.

Re: Shades of Death: Royal Blood

Pretty Ordinary, Which Does NOT Mean Bad***

This game is good on most levels, it just isn't extraordinary on any.

The graphics are good, bit grainy on my 21", but not enough to gripe about. The music is good, and the ambient sounds are very good.

The storyline is okay, fairly familiar though. I was disappointed that we didn't get to see more of the bad guys, and the ending was somewhat anticlimactic.

Some critics say it's too easy, but to me, it was nice to play a game where the puzzles were as easy as the HO. I do agree with the others that the game was too short. But it came neatly packaged in 3 chapters and didn't include any time wasters, such as repeating HO scenes.

One thing I really did like about this game is the way they did the HO scenes so that they fit into an enclosed bordered area that was separate from the task/list/hint bar. Was nice to have clearly delineated search areas.

Good game for a low key change from the real puzzlers, but nothing unique.