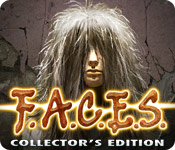 When a medical consultation goes terribly wrong, it’s up to you to
realize the full potential of your unique ability and save the day!
Discovering that other people have similar gifts as yours, you realize
that evildoers would do anything to possess your talents. Dive into
F.A.C.E.S. and explore gorgeous Hidden Object scenes to become a hero!

Great Antidote For All That Recent Schmalz

Don’t get me wrong, the ART is GOOD, well, reasonably good, but the game has got to be the UGLIEST I’ve ever played. Keywords for it would be RUST, BLOOD & GRUNGE.

The GAMEPLAY is quite OKAY, if the artwork doesn’t put you off. PRIMARILY a HO GAME, the FREQUENCY & DIFFICULTY of the PUZZLES INCREASE as you progress.

The HO SCENES are STATIC, NON-INTERACTIVE LISTS, which are visited TWICE. The lists are RANDOM GENERATED, so often you are asked to find the same items as the first time. As well, some items are given two different names (for example: metal cup 1st time vs. tea cup holder 2nd time).

The AMBIENT SOUND was screams, cries and some pretty scary MUSIC. No VOICEOVERS.

The STORY is the familiar ESCAPE THE ASYLUM one, with the TWIST of having PARANORMAL ABILITIES & other patients to RESCUE as well.

There is a MODERATELY USEFUL DIARY, but NO MAP.

For me the only really outstanding thing about this game was the "ANGEL", who turns up every now and then, complete with straightjacket, to provide some useful guidance. She is really well depicted and is great symbolism. She'd make a nice signature item for a series.

Despite my lukewarm response to it, it must be noted I had no trouble finishing the game, it HELD my INTEREST all the way TO THE END.

Yeah, it's been some time since I played it but I thought F.A.C.E.S. was pretty great.
4.5 stars from me.

I know I will be in the minority, but I could not get through this game. Only because there
were SO MANY HO's.

I bought it on the many raves it got, not realizing how HO heavy it was.
I landed up quitting and uninstalling out of sheer frustration.
RenaissanceMom

That's pretty funny, because I *hate* HOs but I don't even remember them in this game. Other games, like the first Enigmatis, were imo so riddled with HOs that I could hardly finish it, good game or not.

But now that you've mentioned it, I'll probably never play it again without being annoyed by all those %#$& HOs.