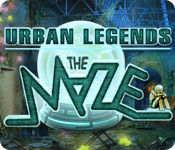 During the finale of The Maze, an incredibly popular reality show, the transmission is mysteriously stopped. Now you’ve been hired by the families of the missing contestants and it’s up to you to find them! Discover what really happened during the taping as you explore the incredible set and use your Hidden Object talents to proceed in Urban Legends: The Maze.

Options include separate sliders for music and sound, plus Windows Mode and Custom Cursor. There is no difficulty setting, everyone gets the same gameplay, though the tutorial is optional.

There are no voice overs, the cut scenes are skippable, and the HINT button refills pretty quickly. During the adventure portion of the game, the hint button will tell you exactly what you need to do. Blatant? You bet!

Would have been nice to have an actual hint, but oh well~

Speaking of hints, you have both a journal and a map. The journal contains spoilers, so unless you need help, I don't recommend reading it. The map shows you where actions can be taken right now, as well as where you will need to visit later. It also features a "jump-to" option - just click on the room you want to be in! I can hear the happy cries of those who hate the to-ing and fro-ing in these games

The mini-games are skippable, if you wish. Some are very easy and some are quite hard, which is nice for a challenge. I like that you do not have to view the instructions for a mini unless you want to. To view directions, simply click on the 'Info' button.

Gameplay, you ask? Well, besides the rampant hand holding, it's acceptable. Everything is pretty straightforward and easy towards the beginning of the game, but it gets progressively harder as you continue through the game. It never gets HARD, but it does get a bit more challenging

The hidden object scenes are your typical junkpiles, but nothing too overwhelming, and there are no anachronisms.

Something that really irks me in a game is illogical solutions, and there were two instances of actions we were supposed to take that were SO unbelievable that I was literally exclaiming outloud. Things like, "You want me to do WHAT??" and "Excuse me? That would never ever work, not even if you tried for a million years!!"

These things happened relatively early in the game, and nearly made me stop playing. If it wasn't for the fact that I'd blindly purchased the game on friends' recommendations, I likely would have just dumped it. As it was, it wasn't irritating enough that I didn't want to find out how the story went.

The storyline is interesting enough. Contestants in a reality TV show go missing, and their families have hired a detective (you) to find out what's happened to them.

Because of the matters I discussed above, I was feeling rather disenchanted with the game, but my feelings changed abruptly when I hit a scene in Level 3 that was so beautiful that I literally gasped. Strange how my attitude changed when faced with this new scenery. For the rest of the game, I really enjoyed myself! The gameplay and mini-games were getting more challenging, and the graphics sucked me back in where the game had been losing me.

The only problem now was that I knew where the story was going. Toooo predictable... except that I was WRONG. The story did not go the direction I thought it would, and that made me very happy. Sometimes it's good to be wrong!

The devs through a bit a humor into what is otherwise a serious storyline - something I didn't realize until I restarted the game to double-check options and such for this review.

Right before the very first mini-game of the game, there is a sign. Take a look at the electrical panel before you remove the cover

Spoiler:
Warning: Do not pee on electrical panel!

Overall, I did not think I was going to enjoy this game, but now that I've finished it, I'd say that I will play it again someday - if only because I rushed through it on this first time through.

A Truly Original & First Class Production Set In The Present
Well, it was when I first posted this!

This game is so good in so many ways, I'll have to resort to itemising if I'm to get you to read it.

1. STORY - Original!! And set in the electronic age! And CREEPY! Contestants have disappeared within the sets of a reality program - your job is to find out what happened - and it's soon obvious that something really freaky is going on.

2. HUMOUR - like the leopard in the bathroom and the "That only works in reality shows", this game takes the mickey (gently) out of everyone's favourite TV genre (personally you wouldn't catch me dead watching reality TV).

3.HIGHEST QUALITY ARTWORK - it's fabulous, top of the range, and it's colourful AND modern. Not a medieval weapon in sight - okay, well, maybe a couple, but they were relevant to the story in that one scene.

4. SOUNDS - this game doesn't rely so much on music to set your skin crawling - sometimes the silence is more ominous, and when the scary music does kick in, you'll jump. Also, to add urgency, some of the most intense moments are enhanced by the sounds of the modern age that drive us all nuts - think chainsaws.

5. HELPFUL HINT JOURNAL & MAP that you must use or you'll be the one lost.

6. ORIGINAL INTERESTING PUZZLES that will twist your brain in knots, with, thankfully, a speedy skip button. Lots of HO scenes, but twice as many puzzles.

7. FAST PACED, CHALLENGING & LONG - There are reviewers in these pages that disagree me on this last point but I just don't get them at all. I'm an experienced intermediate player and I've never seen a game like it. I was totally out of my league. It took me 8 hours and near the end I was suffering major battle fatigue.

This is something really special. Even if it is too hard for me now, I'll be playing it again in the hopes that I'll learn how to be worthy of it.

I recommend this game!
(I'm still not 'worthy')
genkicoll

I remember dearly loving this game when it came out. I replayed it a year or so ago, and loved it then too. So different as far as plot... at least IMO.

I'm a sucker for a unique plot even more than scenery or music or puzzles. Takes all kinds I guess!
JustTheFacts

I'm a "plot" person too esme. A good plot is all that will get me to play a game that looks awful. Like Lost in the City. Great weird and scary plot, graphics totally arghly though. But persevered through both games to follow the unique story.
RenaissanceMom

I can't really remember a thing about this game (I'm a card-carrying member of the CRS club) except that I know I *LOVED* it, haha.
Sponsored content