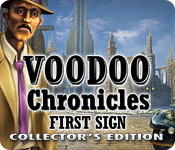 Help out James Voodoo as he investigates a mysterious attack and goes on an incredible adventure in Voodoo Chronicles: The First Sign! Explore the forsaken hamlet of Ravenhill, then travel the world’s wealthiest city, Richtown, and uncover the secret of a lost tribe in this challenging Hidden Object Puzzle Adventure game. Can you save the city from the terrifying monster? Find out in Voodoo Chronicles: The First Sign!

Better Than I Expected, But Not Worth CE

I never buy CEs, and when I bought this by mistake I was quite cross. I didn't think I'd like this much from the trial, so I was doubly doubtful. Then I was surprised how much I enjoyed it.

Set in the era of speakeasies and flappers, it is very much a period piece in style, right down to the music and the way people talk. The actor who plays Voodoo is great, he's a real ham, but it suits the game's era to a tee. I also like the fact that he fed his cat before leaving for his big assignment.

This game, despite the name, is not really about voodoo, that's just the guy's name. But it does involve magical and sinister beings - who are wonderfully creepy. But in a light-hearted way.

The graphics are excellent and the gameplay good. Plenty of HO scenes, usually visited twice. They are pretty static, and occasionally some objects are given strange names, but none of that interferes with the fun factor. Not much in the way of puzzles.

The ending was cool, and satisfying. Then, being a CE, there followed extra gameplay. This really didn't do much for me, and THAT ending was really annoying, it just... stopped. I certainly was disappointed with the CE, I think the story played better without it. But having the strategy guide was very helpful.

Basically, I think it a better than average game that was far more enjoyable than I expected, but I see no reason for buying the CE.

» Words to Live By
by genkicoll Yesterday at 4:25 pm