The Adventures of Jason and the Argonauts

The Adventures of Jason and the Argonauts

The Adventures of Jason and the Argonauts
by Pixquake - June, 2015 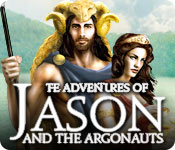 The mythical journey continues. Go back to when Gods roamed the land and heroes fought epic battles. Follow Jason and the Argonauts to a place beyond the edge of the world on a quest for the Golden Fleece. Win the favor of the Gods and use their generous power ups to complete Match 3 puzzles. Choose your level of challenge and design your city in honor of Hera and other Gods of the Olympus that will assist you on your mission. Follow the great sorceress Medea's instructions to find your way. Meet fabulous creatures and mythical heroes in this exciting adventure! 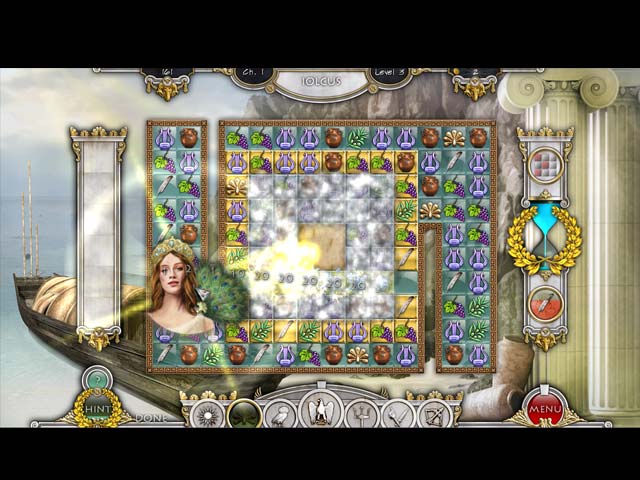 The Adventures of Jason and the Argonauts (Match-3)

There are three difficulties to choose from - Easy, Normal and Hard - which will affect how long you have to wait for hints and skips, as well as the level timer.  There's no timer for Easy mode, and once you choose your difficulty, you're stuck with it for the rest of the game.

There are no achievements.

The game includes every match-3 type that you can think of: swap-to-match, click-on-a-group, chaining, and later on, you even have conveyor belts moving your pieces around!  Although there is occasionally a different objective, your usual goal will be to clear all of the gold and iron "plates" on the screen to proceed.

Obstructions include chains, fog, wood and brick walls, and even various monsters that petrify game pieces.  We do have our helpers, though!  The Gods have blessed our journey, and we can call forth their powers to aid us when we are in need.  Collect the golden pieces that represent each God to fill up their meter, then select the power and use it where you wish.  These items do not have to be matched to collect them - just click!  This is both very cool and and an irritation, as if you don't click just right, it will disappear before you can swap it, so if you were trying to make a match for something else, you've just lost the ability to do so. :\

Match 5 or more pieces to gain a golden bomb in the playing area.  Unlike any other match-3 I've ever played, you can swap this bomb with any other piece on the board, meaning that you can detonate it wherever you wish!  Very nice!

Sometimes you will have to collect quills or keys to unlock areas of the playing field, netting you blueprints or items to help you with your journey. There can also be drops of potion, which will help you to defeat monsters.

The points you earn as you play will be converted to gold at the end of each level, which is used - along with the aforementioned blueprints - to build new areas of your city.  You will have three styles to choose from on each new building, so you can mix things up to your personal taste.

In addition to the various match-3 scenes, you will also have some puzzles and hidden object scenes to complete.  Some examples:  Spot-the-differences, assemble-the-picture (drag pieces to where they belong), puzzle rings, and repeat-the-musical-sequence.

You cannot pause the game by hitting the menu button (even though it LOOKS like it's paused, it's not), so be mindful if you're playing it timed!  I had the game crash out on me a few times (mostly when I tried to shuffle the game pieces), but it was only mildly annoying, as it only took a few seconds to get back in the game.

The story is based upon - if you had not already guessed - Greek mythology, and the voice they chose to narrate it was beautifully-chosen!  Very dramatic and fitting for the tale.

This is an interesting match-3 game with plenty of modalities to keep the gameplay fresh, nice graphics and music/sfx, and a very fitting voiceover.  Recommended!
_________________
Never be a prisoner of your past.
It was just a lesson, not a life sentence.