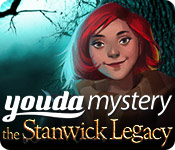 Uncover your grandfather’s secret in Youda Mystery: The Stanwick Legacy,
an incredible Hidden Object Puzzle Adventure game! After inheriting
Stanwick Manor, Emma searches the house and discovers that there is a
secret to reveal. Finding proof that the house isn’t as abandoned as she
was led to believe, Emma must now solve clever puzzles and make her
way  into locked rooms to discover the truth behind the mansion in Youda Mystery: The Stanwick Legacy!

Not Bad, Not Great

This is definitely a HOG, with HOPs (Hidden Object Puzzles) outweighing any other aspect of the game. There are some other puzzles, mostly familiar, but I found myself having a fair bit of difficulty solving them. It did not help having no instructions.

The story is simple. Your grandfather dies leaving you the family mansion, which you haven’t seen in years. You know there is a secret stored within the old mansion and you are determined to find it.

The graphics are good, but not to my taste; they have that shiny quality that I think interferes with your focus. The house and the HOP scenes are all clearly presented, although there is some playing around with the lighting (which is often too dark to begin with) in the HOPs. The HOPs are static lists, and very long. There are 16 slots, but with the multiples that are always a part of the list, this can get as high as 30. Each scene is visited twice. Even on easy mode, hint and skip are slow to fill.

There is a notebook that keeps ESSENTIAL INFO about what to do, as well as a task list. There is also an interactive map that tells you where you have unfinished tasks. It is not a jump map. It is very useful, though, because it is a 4 level mansion, and a lot of rooms to cover that are connected to each other in odd ways. Getting lost is par for the course.

The voiceovers in this game deserve a special mention. They are appropriate and well acted, although I got a little tired of the chatter after a while, but then, so apparently did the developers. Because just when I was thinking “enough already”, she stopped commenting out loud about everything.

Finally, one important note, the game is not very long. Under 3 hours, and I wasn’t in any kind of a hurry.

This is an okay game, nothing brilliant, and I much prefer the second of this series “Legacy Tales: The Mercy of the Gallows”.

I had no idea the games were related!

They don't make it obvious, but the credits say Youda Games, same as this one!

The thing that struck me, playing it again after a year or more, was how very similar the graphics are in each. I noticed because I don't like em!
genkicoll