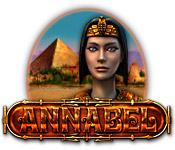 Available at Big Fish for PC
While exploring a museum in Egypt, Annabel
stumbles upon an ancient curse that claims an innocent victim every ten
years, and she may be next. Relive the struggle of an ancient Egyptian
princess that fought against all odds to be with the man she loved. Only
your wits can overcome the devious puzzles and magical traps set by her
enemies. Could Annabel be the reincarnation of that ancient princess, still threatened by a curse that has chased her for millennia?

This game is a kick!

What an interesting adventure game. The story is OK - thrown off a bit
by the choice of voice actors and the fact that sometimes the lips keep
moving even when the characters have stopped verbally talking, but
still, I like it.

Moving around is a bit slow, but that's good, as if you were moving
around any faster, you'd probably get motion sickness. The perspective
is different than any other game I've tried thus far, with beautiful 3-D
graphics in interesting locales. I really don't think I can do the
graphics justice describing them here.

Gameplay is a bit like that of a FROG, but there too, not exactly. This
is more of an adventure game than anything else, but there are hints
available, and it's not terribly hard. Unlike the true adventure game,
you do NOT have to save manually, which is good news for those like me
who have trouble remembering to save :R

The introduction of a hilarious new character 2/3 of the way through the
demo added a new dimension to the game that makes it much more
interesting! Now I have to know what happens next!

Not a hard game, but great graphics and getting-fun story! Good adventure game for beginners.

I was not expecting the humor they threw in, but I absolutely loved it! Too funny!