We follow the story of Lady Cornelia Darkmoor, a beguiling young aristocrat who masquerades as the notorious highwaywoman, Shadowhand. Fleeing a crime scene and forced to act under the cover of darkness, Shadowhand's mission to safeguard a woman she holds dear leads to a web of corruption, smuggling and blackmail. 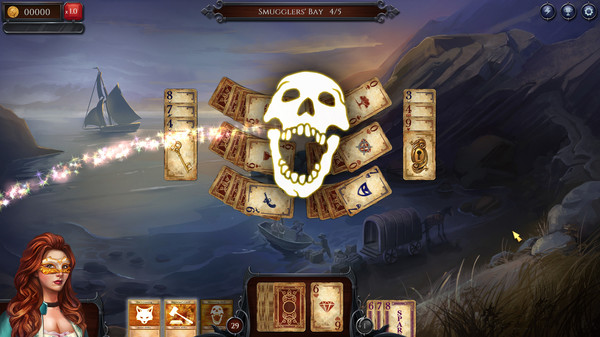 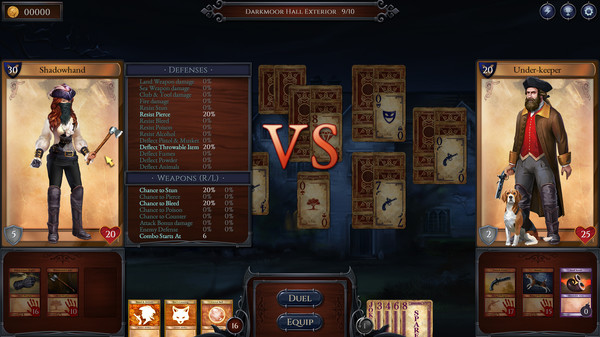 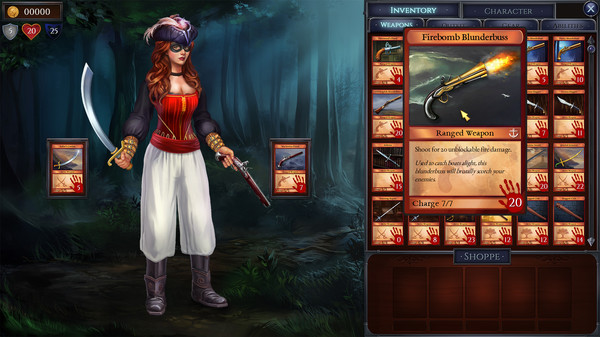 Options include Full-screen/Borderless Window, Tutorial, Show Blood and Custom Cursor.  There are 3 difficulties (Relaxed, Normal, Very Hard), and each is clearly marked as to what is different.  Difficulty can be changed before each chapter if you so wish.

Gameplay is similar to that of Faerie or Regency Solitaire, with cards being placed one lower or one higher.  The first big difference here is that there are no face cards (Jack, Queen, King, Ace).  Instead the cards range from 0 to 9.  Zero can go on nine, and vice-versa.

Gain gold by clearing stacks of cards, and get multipliers for that gold by making long number runs (5+ cards) without drawing a new card.  You will find both spare cards (numbered) and jokers that count towards your number runs, but you have limited space for these bonus cards, so don't be afraid to use them!

There are a total of 22 chapters, each with ten hands to play.  The goal of each solitaire round is to clear every card, and if you do so, you will be awarded three stars.  You can replay each hand as many times as you wish in order to improve your rating, but you will not keep any special cards that you've found during that round.  Likewise, any jokers you've used will be back in your inventory.


Chapter progress (ie. round 7 of chapter 4) will be saved if you need to exit the game, but anything you've done on the current hand will be lost.

Shadowhand is a solitaire game, but it is also a battle-card game.

Intermittently you will fight turn-based battles, and while it's still the solitaire basics, there is a lot more that you will need to pay attention to besides the cards!

If you're happy with what you see, hit DUEL, but otherwise, click on EQUIP in order to adjust your clothing, weapons and the items you bring into battle.

The Outfits and Weapons that we find are not just to dress Shadowhand up like a doll - These items are highly-tailored to give us defenses and buffs during combat.  For example:  Notice that your opponent has a projectile in his inventory?  Equip the hat that has a 20% chance to deflect.  He has a defense against land weapons?  Switch to a tool, melee or perhaps a sea weapon.

In addition we have Gear that we can take into battle, ranging from buffs to throwable items to healing draughts.

The "stores" are nicely-integrated so as not to affect the immersiveness of the story.  You can access them at the end of each chapter, and can selected items that include not just the items I've mentioned above, but also new Abilities.

Shadowhand will evolve as we progress, and and the end of each chapter we will need to distribute a couple of Attribute Points, depending on how we would like to see her grow.  Hover your cursor over each of the options to get a description of how each attribute change will affect her.

The tale is intriguing, and I definitely wanted to see where it would go next.  I didn't know how to feel about what was happening at one point, and I saw a glaring plot hole at the end of that same chapter, but both of these things were addressed in the final chapter.

Shadowhand is an addictive card game with RPG elements, fantastically-implemented gameplay, an interesting story, and great sound effects and music.  Highly-recommended!
_________________
Never be a prisoner of your past.
It was just a lesson, not a life sentence.

This is my absolute favorite solitaire game I have played so far. It was a challenge and fun with the solitaire and RPG parts put together. Awesome!
Sponsored content