Dear Developers: What We Really Want!

Dear Developers: What We Really Want!

Here are a few notes from me:

Searching for list after list of hidden objects can get tedious after a while. Give us some story, mini-games or different ways to find hidden objects occasionally. Typically, we have a few ways of finding objects: Lists, silhouette (which some people don't like), pictures of the item, even poems. By mixing it up and giving us variations, we're less likely to get bored.

One game I played had you find items by showing you a sepia sketch. This added to the difficulty without saying, "HERE! This is exactly what you're looking for!!"

I think the reason why adventure-HOGs are so popular is exactly because we need a little variety. Moving about where WE want to go breaks it up and makes us feel like we have more control.

If you're going to add mini-games (which so many do), have them actually be pertinent to the story! This, also, is important to the immersiveness of a game. If we're in the middle of a heart-racing situation, suddenly stopping to play a nice game of chess doesn't make any sense.

We don't need (or want!) every mini-game to be so difficult that there's no way we could figure it out, but please don't make them so easy that they take no thought at all.


- Give us an option

Add a SKIP button. Some people don't like a lot of reading, some don't like to play mini-games. Yes, they both add to the fun, length and immersiveness of a story, but it should be our choice how immersive we want it to be.


- What's with the sparklies??

PLEASE don't give us unsolicited hints! This is exactly the issue I had when I beta-tested Tamara the 13th: Too much hand-holding and unwanted hints! The game is beautiful, but the fact that you don't have to think for yourself - at all - is really a turn off.

I don't know how many times I've seen complaints about this. One or two spelling or contextual mistakes are excusable, but consistently throughout the game? Not acceptable for many people. If the story and gameplay are good enough, I can ignore it, but it really throws off the all-so-important immersive feeling.

If the game to be translated into other languages, get someone who not only knows the language, but is a native speaker to help with the translation and proofreading! Yes, I know it is more expensive, but it will really lend credibility to your project, hence earn you more in the long run.

Nothing will break the spell of a good story like seeing an electric blender in Medieval times. If you're portraying a certain period in time, at least double-check to see if questionable items belong there A little research goes a long way!

Music will add a lot to a story, and I'm not saying you have to have a full orchestra with an all-original score... but at least make it something we can listen too. If you absolutely must have annoying music, at least give us the option to turn it off separately from the voice (if there is a voiceover) and the sound effects!


- Break out of the norm

I'm sure I'm not the only one who is getting tired of the forumlaic "Search three scenes. Story. Advance to three new scenes (and unable to go back to old scenes). Story. Repeat," type of gameplay. Look left, look right, look forward. Look left, look right, look forward... it gets a little old, even with an original story. Doing something a little different would be a pleasant surprise.

Witch's Prison is brilliant all around, but I was shocked when I saw the Brightness Control option, as I'd never seen that available in any game. I and many others LOVE this option, so as Grammaton says, "Also consider putting in a brightness adjustment. Simply because all games should have that."

textrekkie, on 06 November 2011 - 04:38 PM, said:(RE: Dana Knightstone 2) Even in Advanced Mode, the game gives too many hints either via text, dialogue or journal. Please--I'm begging--please stop this practice. There is a hint button and Strategy Guide available for those who want hints. This is becoming a make or break deal for me as it significantly lessens the amount of time it takes for me to complete the game and it lowers my enjoyment of the game as well.

I have to agree with Tex on this. If I'm playing on Expert/Advanced Mode, don't give us unsolicited hints! If we need them, we'll hit the hint button. The only exception is sparklies for hidden object scenes - those can stay. I played Vampire Saga: Welcome to Hell Lock on Expert mode, and it was a bit confusing trying to find what I was supposed to be doing when I didn't know where the hidden object scenes were supposed to be. Otherwise, it was great

Also, if you're going to make a darkly environmental game, please give us an BRIGHTNESS OPTION! I know that I would have been happier with Dreamland if it had had the option (great game!), and I was thrilled that Nightmare Adventure: Witch's Prison DID have it. I can't tell you how many times I've seen people give up on an outstanding game simply because the graphics were too dark, so do yourselves a favor and make this a priority if there's a chance someone might think the scenes are "too dark". I hate to see a good game get panned over something like this!

I actually like my sparklies, at least at first (until I get into the rhythm of a game). But I can understand how irritating they would be to others, so having different difficulty levels is a great idea.
And I do enjoy my "game music". While I know people's taste in music varies, I've actually replayed games that were otherwise "meh" just because I loved the music in them.
One more thing: voice talent! I'd rather just read than listen to a voice actor who sounds like the developer's unemployed 13th cousin (unless said cousin is actually an ACTOR). At least out here in L.A. there are plenty of starving actors running around who would probably love to have the gig, and who might actually sound like the characters they are supposed to be portraying.
jeanniemouse

And while I'm at it: It's the STORY that I'm playing for as much as the gameplay. Don't be afraid to throw a twist here and there, and I'm not dependent on a happy ending to make for a satisfying game (in fact, a few of my favorite games definitely DIDN'T have "happy endings").
Also: we all have different "hot buttons". Mine happens to be animal injury/abuse/death. I'm sure others have their own (I've heard child endangerment and suicide mentioned by other players). Please, if there is an element in your game that may be controversial or painful to some players, a warning would be much appreciated Believe me: you may lose a sale of that particular game, but at least you won't lose the goodwill of the player toward your name and your product.
genkicoll

Continuing on with Jeannie's above post, I am getting so tired of having to catch mice! Seriously? It seems like 7 out of the last 8 games I played required me to catch a mouse! Usually it's to give to a cat, but during the last game I played, it was actually to move the mouse to a more hospitable location. THAT was refreshingly different, at least!

Another tiresome task that keeps coming up is "the key is on the inside of the lock, so slide a piece of paper under the door, then push the key through so that it falls on the paper," etc. I've seen that in at least three recent games.

"Move the stacked items from the left to the right" is getting pretty old, as is the puzzle where you have to slide the items up or down in order to be able to slide the key into the lock.

How about some new stuff, devs? Something creative like this one from Stray Souls: Dollhouse Story: 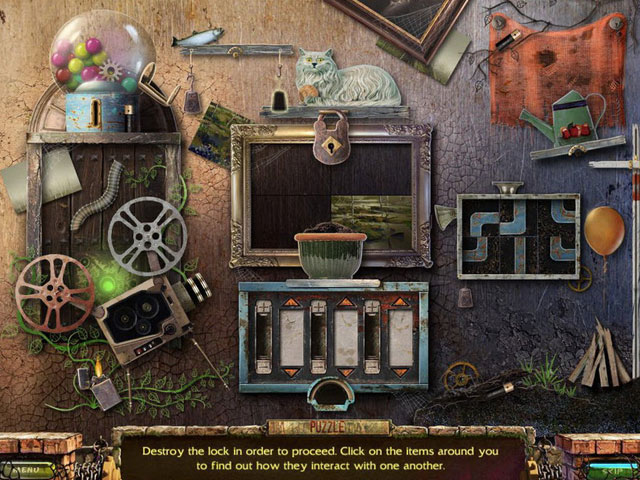 or this one from Gravely Silent: House of Deadlock:

or like any of the puzzles from MCF: Ravenhearst or MCF: Madame Fate?

The same old routine is getting tiresome - a new approach would be much appreciated!
_________________
Never be a prisoner of your past.
It was just a lesson, not a life sentence.

Devs, here is something that's been bothering me for a while. I will give you a visual so that you can see exactly what I'm talking about.

Examples given are from games that are upcoming

WRONG:
From the game
Twilight Phenomena: The Lodgers Of House 13 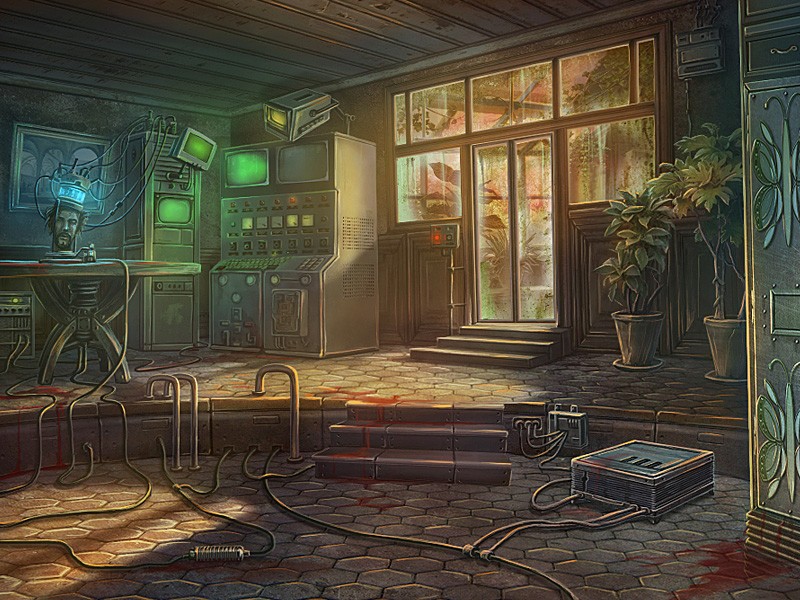 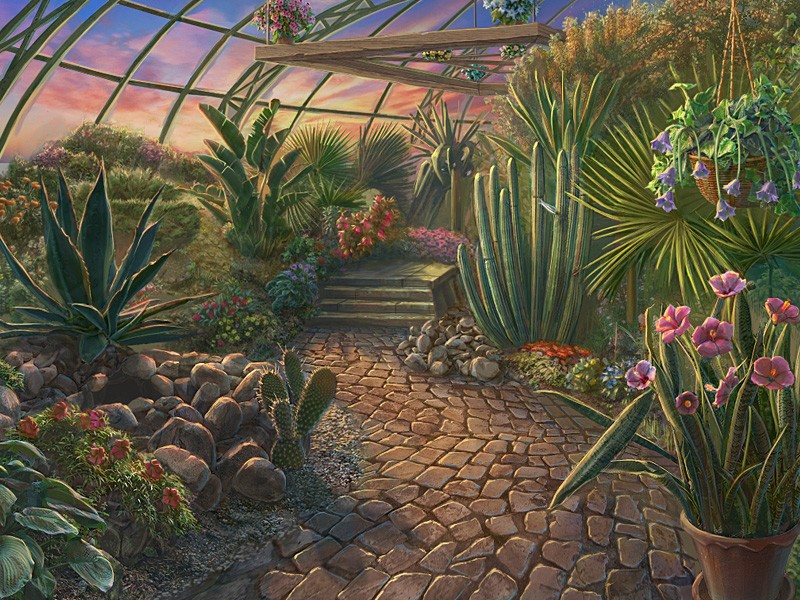 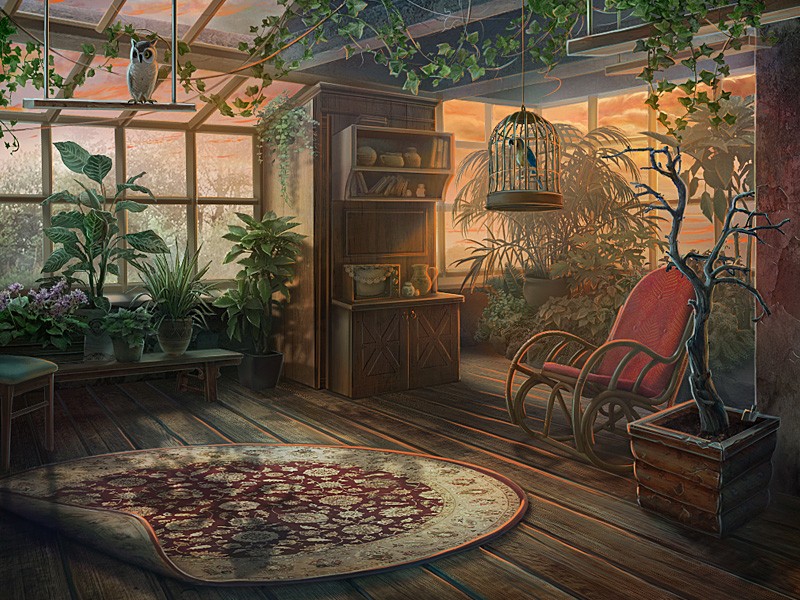 Stop and look at the images for a moment.

No? Right offhand, the graphics are quite beautiful, and there's nothing wrong with that! Looks like a great game, right? I think so too, but there is still a problem.

All three of the screens you are seeing above have the same color palette and the same diffuse lighting. It's great to have a certain style for your graphics, and off-putting when it looks like different scenes are by completely different artists, but using the same color scheme / lighting effect in every location is a BIG mistake. It makes us, the players, expect every other screen to have the same effects, and when that happens, our minds wander and we get bored more quickly than we might have, otherwise.

RIGHT:
From the game Nearwood 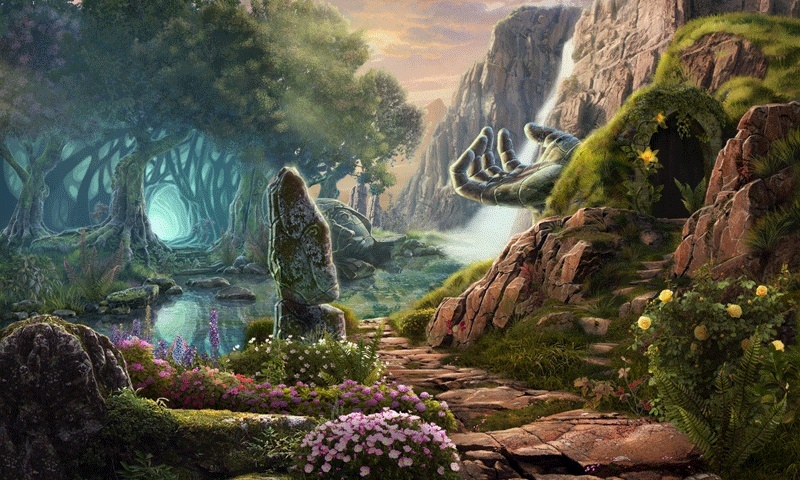 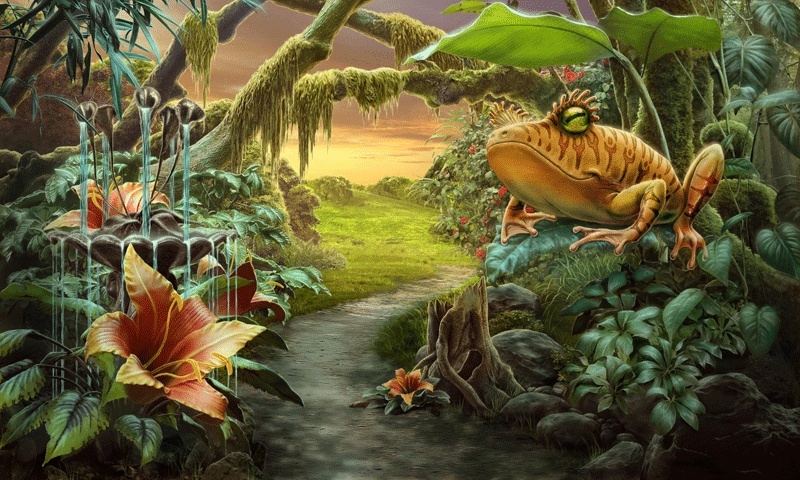 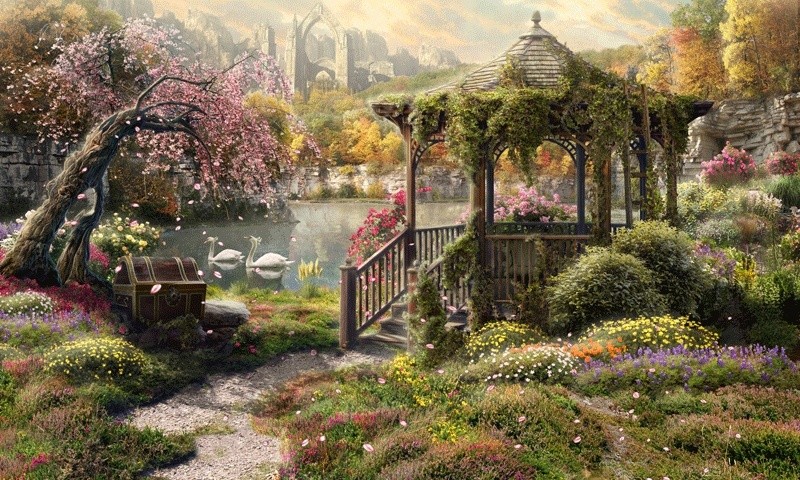 Do you see the difference? Every screen has a different light source, and different color palette. The scenes are obviously done in the same graphic-style, but by using more realistic lighting effects (inside and outside are obviously not going to have the same kind of contrast!) and switching up the color scheme, you have a more realistic view that will not end up causing player-burnout.

Don't get me wrong, I'm looking forward to trying Twilight, it was simply a handy reference to get my poing across

P.S. - For those of you who would like to see more information on these upcoming games, simply make sure you're signed in here at GGG -- The game titles above are links to the game previews