First of all, I left home at about noon yesterday.  Monique (SiL) was with me, and we had our pizzas, our extra-large thermos of chai tea and our chauffeur/bodyguard (that would be Monique's son) and one of his friends. On the way to Seattle

The party was almost 250 miles away, so we needed to be prepared for bad weather and/or bad traffic.  As it was, there was no bad traffic, beautiful weather, excellent company and an art pad for me to draw on, so time flew by.

Monique caught a picture of me whilst drawing: SiL and I were in the back seat when she mentioned that, "You've always been so good at eyes!"  I took this as an opportunity to tell her about my art teacher in grade school.  I quickly sketched out how I used to make eyes, way back when, showing her the fancy dresses I was so enamored with as a child and telling her as I finished, "... and I always did the arms like this, 'cause I didn't know how to draw hands at the time." haha - you can see the sketch pad through the paper - it was just a scrap piece of paper I was using.

Next I was showing her the techniques that my most wonderful art teacher showed me, but I was trying to draw it too big, and it's so embarrassing that I refuse to share it. haha

I could say that it's because the car was bumping around and that my hands were shaking at the time (both true), but mostly it's because I was trying to draw in a way that I don't have as much control.

SO, to show that I'm not a complete Picasso-wannabe, I started another drawing.  As usual, I started at an angle with no intention of finishing it, and that's why part of the head is cut off. Lastly was just some various drawings that I used to do as a teenager.  Garfield back when Garfield was actually FAT, a couple of Christmas decorations, etc.

(Terrible pictures of the drawings, I know, but the best I can do until I get some good batteries)

We actually made it to Stimson-Green Mansion nearly an hour early!

They wouldn't let us in quite that early, but they said to come back in half an hour and they'd let us in.

As luck would have it, the Space Needle was just a couple of miles away, so we drove over, gawked for a minute or two and headed back for the party

It was very dark, so we could not see much of the splendor of the outside, but here's a pic from BF's blog: 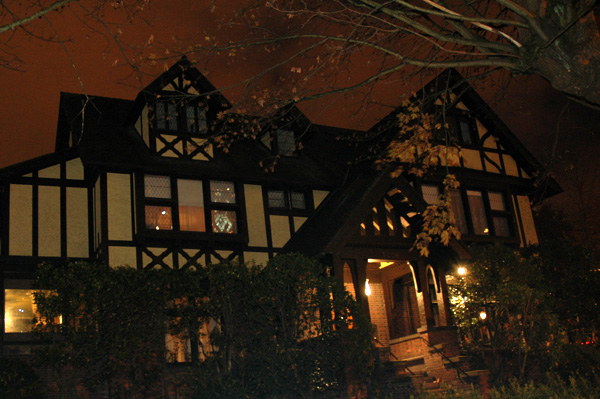 As we entered the foyer, we were greeted by a life-sized cutout of
Charles Dalimar (alas, the actor was attending his premiere of something in another city) 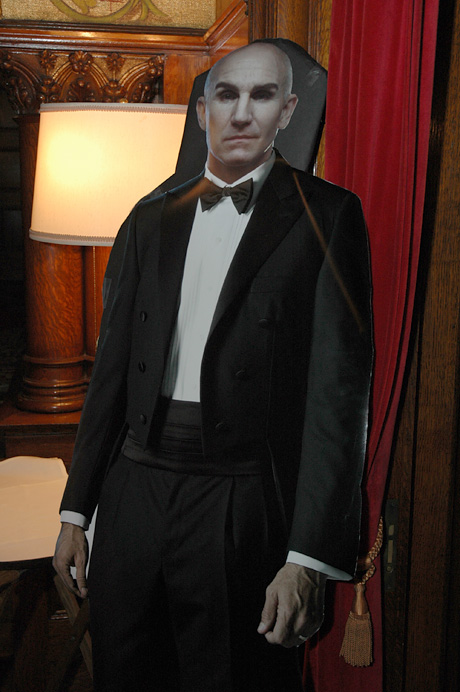 pic from the BF blog

and directed to the sign-in room, where we were given our MCF Detective badges 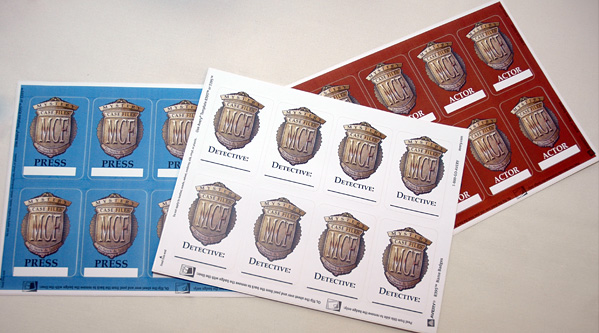 pic from the BF blog

We were also given an 8x10 with a picture from the new game in the background, and a journal with items listed on it in the forefront... We were going to do our very own LIVE hidden object game! and in another room we found the twins' dress and the infamous dollhouse: In a hallway, we also found pictures of various game characters.  Of my pics, only the one of Emma (in her dress, of course) turned out: Monique got a good pic of Victor's picture: On the staircase landing

What a blast we had tromping up and downstairs back and forth trying to find those last hidden objects!  Chris (Solice's boss) hid one of the items, a rooster (in Emma's "bedroom"), so well that it took at least twenty minutes before anyone spotted it.  The umbrella turned out to be everyone's nemesis, and we all ended up congregated in the bar area.  We knew it was there, just not WHERE. It turns out the darned thing was... A Morten's salt container (you know, the kid holding an umbrella?) hahaha

"Madame Fate" made an appearance, and I know I'm not the only one who just HAD to get her picture Next was the foooood, which was a very fancy affair. I did not partake, as I was pretty stuffed with the pizza I ate on the way up to Seattle, but Monique says there were beautiful platters laden with food - grilled vegetables, shrimp skewers, salads (that's what you see in the little chinese food containers), salmon, etc.

While we were eating, there was the game presentation/preview. This pic shows Patrick Wylie, BF Vice-President; our friend "Victor" (Lee Rahfeldt); and Adrian Woods, the lead game designer: Lee Rahfeldt is hilarious, always ready with a quip or witty remark, and after knowing him for mere minutes, you can't help but like him and laugh at his antics.  I overheard someone saying that they wanted to take him home with them! haha

The game itself looked incredible

They showed us the beginning gameplay, then skipped in to a cutscene which evoked both crowd appreciation and gasps.  There were a few moments we were shown that were reminiscent of the shocking moments in Dire Grove, something I especially appreciated

The closing credits are greaaaaat, something to look forward to, for sure

After all of that, we were encouraged to grab a poster and have Victor, the actresses (Emma, Rose, and the girl who played the twins), the game designers, artists, etc sign it.  Everyone was still socializing, eating, drinking, and making merry, and dessert was being served at that point, as well.  I had a great conversation with an art designer whose dessert I interrupted *giggle*
but he didn't seem to mind.  I'm actually not sure he ever did finish his dessert. lol~ Here's the artist whose dessert I interrupted We were all given a raffle ticket upon entry, and at 9:00, they started drawing names.

The first winner got a Big Fish snuggie.

Winner #2 got a beautiful, large framed EFR poster (different than the one we were all given) that was signed by everyone.

Winner #3... *siiiigh* how I would have loved that ticket! ...  The Grand Prize winner got an iPad 2, $15 iTunes gift certificate and a Big Fish screen cleaner.  I so wanted that iPad for my youngest (non-verbal autistic).  I'm gonna get her one, someday!!

The party kind of wound down after the raffle, and we got a pic of  "Emma" and "Rose" posing with Emma's dress (and the gas mask): Monique got loads more lovely pics, but I think the ones I've posted have told the story pretty well.  It was a great night, we really did enjoy ourselves