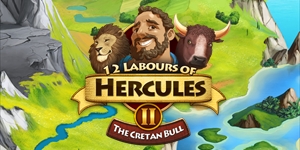 Hercules continues his quest! Join him on the journey to tame the infamous, bull of Greek mythology in 12 Labours of Hercules II – The Cretan Bull, a time management challenge presented in a colorful comic book style.

Frightened by the evil goddess Hera, the Cretan bull goes wild, running through towns, destroying everything in its path. Roads and buildings are in ruins and Hercules comes to the rescue. Start out with the basics helping Hercules to rebuild and restore, and continue on to bigger challenges of building new wonders and solving perplexing puzzles.