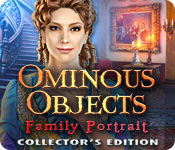 You arrive home from a long business trip to discover your new home in disarray! Your wife tells you paintings throughout the house have been coming to life, and now your children are missing. Only little Leia remains, but she refuses to unlock her door. Who or what frightened her so badly… and where are your other children? As you seek them out, you realize your new home hides many dark secrets. You must uncover them before your family is cursed to remain there forever in this chilling Hidden Object Puzzle Adventure game.

FIRST IMPRESSIONS
From the makers of Dark Dimensions comes a nicely dark magical painting game. Not to be confused with the other game I recently reviewed, Haunted Manor 3: Painted Beauty. It is another fine example of how a fertile imagination and artistic talent can create gems for our entertainment.

SIGHTS & SOUNDS
The excellent intro features clear and lifelike cut scenes with a narrative voiceover that sounds just perfect for the part, even if the intonation is a bit odd at times. I can forgive anything, though, in a character that uses irony! The locations are gorgeous, a huge castle filled with glorious colourful objects and lavish furnishings. The mix of light tinkling music and subtle ambient sound is so sweet, it lulls you. But don’t get too comfortable, there is evil afoot and as is so often the case, it’s noisy! No attempt has been made to lip synch, the characters remain still. The voiceover does some responses to certain actions.

WHAT’S HAPPENING?
You arrive home after months abroad to find your family in direst emergency. Your wife explains that 3 of your 4 children have just suddenly disappeared, and your oldest girl has locked herself in her room and won’t come out. Suddenly, a ferocious Doberman, pictured in the painting nearby, materialises and threatens your wife. It will take a little deduction to find out how to deal with him, and with the other dangerous creatures that seem to spring out at every turn.

Eventually your daughter tells you what happened. They were in the library and the younger daughter wanted a new book to read. Reaching up for one activated a secret passage behind the bookcase. There they saw a portrait of a stern-faced man, and as they looked, he became dark scary smoke, that wrapped itself around the children and drew them into the portrait.

The ghostly presence must be that of the original owner, a skilful artist from centuries past, who when painting his family portrait lost his whole family into it. He was tried for their murders and burned at the stake! Is it he whose malevolent presence has taken off with our children, and is setting the paintings’ inhabitants upon us?

GAMEPLAY
Another excellent game of varied gameplay. The HOPs are mixed, a mini-puzzle in an interactive word list, where the final object must be pieced together from the fragments exposed when you take away the items on the list. Others include misplaced items and progressive silhouettes. One, at least, is visited twice.

Other puzzles are somewhat more familiar, but nicely done and well integrated. There is a variety of difficulty amongst them. The adventure side is even more than usually sensible, and there is not too much to and fro. Three levels of difficulty. A teleporting hint, and an interactive jump map. There is no journal, just a task list, and our achievements, and our pet’s playroom. Yes, there is a cute companion, a fluffy cat who is most helpful, and for whom we can purchase stuff.

CE BLING!
The cat has many items of furniture and entertainment that you can purchase with the coins you find as you play. I detected no other collectibles. The achievements cover performance, and there are quite a few of them. There is a Match-3 game, wallpaper x6, concept art x16, music x4, and 19 videos called Developers’ Diary. I watched the first two, and really enjoyed them. They were funny, and showed the developer’s team as likeable and friendly.

COMBINED IMPACT
Well, I love a good magic painting game, and this one is fine. Not a world-beater, but lovely graphics for spectacular locations, interesting HOPs, and an engaging story... and I’m a push over.