Beyond the Unknown: A Matter of Time

Beyond the Unknown: A Matter of Time

Beyond the Unknown: A Matter of Time
(Earlier known as Beyond The Unknown: The Golden Sarcophagus)
by ERS Game Studios - July, 2014 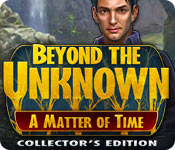 Your grandfather, a famous archaeologist, was lost at sea years ago. He was searching for the legendary Golden Sarcophagus, rumored to hold a great and mysterious power. Now you find yourself shipwrecked on the very island he was seeking out… Will you finally be able to solve the riddle of the Golden Sarcophagus and find out what happened to your grandfather? There’s no time to waste in this time-bending Hidden Object Puzzle Adventure game!

FIRST IMPRESSIONS
This is a much darker and more dramatic game than expected, and far from being buried in sand and pyramids, as you might expect from the original game name, Golden Sarcophagus, we experience two shipwrecks in the first minute. The intro and interface are quite a departure for this developer, having sleek and modern lines. But the game itself is pure ERS.

SIGHTS & SOUNDS
The graphics, particularly those opening cut scenes, are extraordinary. Clear, imaginative, very fluid with lots of animation and movement. The characteristic hand painted scenes look stunning in this context. This is another game that manages to make a beautiful warm sunshiny day scary. There are these shadows, and “evil mists”

The music is astounding. Great crashing waves of sound, sudden crescendos, eerie silence. Again, very melodramatic. The voiceovers are wonderful, with the player character speaking out loud her thoughts, and the others doing a pretty good job at lip sync. This game is made something awesome by its soundtrack.

WHAT’S HAPPENING?
Bear with them on this. At first, the plot seems all over the place, but soon things make sufficient sense – for a time travel game anyway *grin*.

An archaeologist finds the legendary Golden Sarcophagus, made of pure gold, on a small island, and attempts to bring it back to the mainland. Despite the rumoured curse on those who try to take it off the island. The sarcophagus, belonged to the infamous Time Lord (no, not Dr Who!). The boat carrying the sarcophagus sank before it could leave island waters, but in the process, the 4 golden eagles on its face were lost. The "archaeologist" begs you to find them and return them to the sarcophagus, which he has reset in its original place.

In our awakening moments after our own ship wreck, which takes place 10 years after the "archaeologist" was on the island, we see flashes of news print telling of strange temporal disasters. I really liked that. A different kind of threat altogether. We’re on the island now, looking for our grandfather – is he the archaeologist? And we go to our family home. Were we living on the island that had the sarcophagus? What seems to be happening is actually an age-old love triangle with a time travel paradox thrown in. As well, there are furies to deal with, and the ghosts of revenge – they are minions of that Time Lord dude, I think.

Game was clearly made for esme.

Spoiler:
In the early part of the game you cross a precipice using one of those flying fox wheels. Okay, that's cool, farfetched, particularly with a dog in our arms, but we can take it.

esme, you will, however, be unable to hold your silence, when you are sent back over the precipice via the same arrangement - i.e. UP!! To get to the medicine kit from our crashed boat, the key to which you have just been handed by the 'injured party, on this side of the gap! Argh!!! EVEN I have trouble with that one!

GAMEPLAY
You are immediately caught up in doing stuff. There is quite a bit of adventure play, more so than puzzles and HOPs, although you do get to them eventually of course. The HOPs are interactive lists visited twice, nothing exciting about them, but they are beautiful to look at and clear as a bell. Alternatively, there is a simple Match-3 game you can play, but simple is not easy, and it gets more difficult in each new scene you play.

The puzzles are nothing too difficult yet, but you have the choice to play the easy or the hard version of some. You also have a choice of 3 difficulty levels, and a very thorough range of options with which to customise your gameplay. Enough I think to satisfy the toughest die-hard.

There is an interactive map that you acquire once you’ve got your GPS up and running, and you also keep your notes, task list, replayable videos and photos on your phone. The map only gives you your location and completed scenes. The photos are part of the gameplay. Take 5 photos of areas relevant to the character (5), and you receive a high definition image of him, plus more of his story. That might be a CE exclusive I guess, but... Hint and skip are as long as you want it to refill, and directional.


CE BLING!
There are achievements, and 20 collectible “mysterious clocks”, which are wonderfully intricate clocks of all sorts. Together they open the time portal, which I assume is a good thing. CE extras include wallpapers x5, concept art x20, screensavers x 5, music x4. There are 13 replayable HOPs, and 31 mini-games. There are also photographs we can take with our phone, 5 for each character (5), that will produce a HD picture of them and more detail on their history.

The collectible clocks are good. Hard to find, surprisingly, and very imaginative. That, for me, was the single most appealing part of the extras - and if they are needed to finish the game by entering the time portal, then they are not going to be CE exclusive anyway! I dearly HOPE!

COMBINED IMPACT
This is a fun game so far, and is about 50% of the game according to the game recorder – which took me only 60 minutes. Which makes it seem a bit shorter than my liking, but I was sorta familiar with this game, having played the beta months ago.

And it has some very attractive qualities, such as the sound. It is nevertheless a fairly standard HOPA, and nothing to get hysterical about. No doubt, though, I will enjoy the full game immensely. But as with most ERS games, I am leaning towards the SE.
Esme


They should have just called this game "Every HOPA Cliche in the Book"...

I'm not going to buy it though. Maybe if I have a stray PCC or something I'll get the SE, but I no longer buy ERS CEs.
Sponsored content