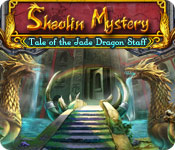 Travel across ancient China and help Yu as she searches for the
mythical Jade Dragon Staff. Save your wrongly imprisoned friend in this
thrilling hidden object puzzle game. Explore fantastic locations, meet
monks, speak to spirits, and much more as you embark on this epic
adventure through beautiful China.

Re: Shaolin Mystery 1: Tale of the Jade Dragon Staff (Pop-up/IHOG)

The game starts off with a voiced narrative. The story is skippable, but the main character talks so fast that there will be no need, unless you simply aren't interested in story lines. Hints are refillable and are pretty average on load time. Sound effects and music are adjustable separately, and the custom cursor can be turned off. You have the option to play with or without the tutorial. I chose without.

The graphics are very nice, the style seeming to be a cross between Tiger Eye and Lost Realms: The Curse of Babylon. Our heroine looks slightly oriental, and since she's supposed to be Chinese, I guess they made it half way (although there could be some plot twist to explain it later on

). The voices are well done (though also with no accent - at least not for the heroine), and the story interesting.

Gameplay is a mixture of Pop-up (bubbles pop up that show which items you need to find to interact with the object), Adventure ("wandering" around, collecting items to use on other screens) and Hidden Object. At first glance I thought it was going to be a straight hog with some pop-ups. Not so! I was pleasantly surprised to find that there is a lot of adventure mixed in, things to keep your mind working, for you have to remember details of places you've already visited :

: You will revisit some of the hidden object scenes, but that is common in this kind of game.

Overall this is a beautiful and interesting game, and one that I enjoyed immensely.