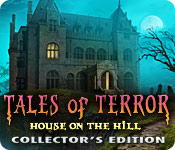 When you signed up for a ghost tour at an old estate, you were just hoping to spend some time with your sister, who loves the paranormal. But the brochure never mentioned the real danger you would encounter the second the doors close behind you. Walls shift and corridors expand, creating a terrifying maze that separates you from your sister. Now you must outwit dangerous traps and find a way out before the house claims another victim. Summon your courage and get ready for thrills in this Hidden Object Adventure game!

FIRST IMPRESSIONS
I didn’t think much of “Crimson Dawn”, the first of this series, calling it “utterly forgettable”. Not so this one. It opens with a good exciting beginning, with high quality cut scenes and very good graphics. Music that is exciting too. A little wry humour.

SIGHTS & SOUNDS
Clear, colourful graphics, particularly excellent in the HOP scenes is offset by lack lustre performances by the live actors. While the visuals are not especially dark, they give off a good eerie aroma. *wink* The voiceovers are particularly well done (as opposed to the visuals). Some achieve lip synch, some do not. Music has considerable variety, much of it very suspenseful and then heart-racing. Clever use of sounds. Love the use of Tchaikovsky. Ambient sounds are suitably ghostly.

WHAT’S HAPPENING?
This is a classic haunted house story. We are Sophia, on holidays with our sister Hope, decide to take Haunted House tour, to be the first to enter a house that appeared mysteriously out of nowhere 3 months ago. Almost as soon as you enter, a descending wall separates you from your sister, who is dragged off by a man – or thing - in a cloak. The story is made to seem fresh by the best impression of size and scope of any house of “many doors” I’ve seen. There is definitely something very other worldly going on.

GAMEPLAY
The emphasis in this game is on adventure stuff. With a lot of dialogue, plenty of historical information about the house, and lots to do. There was only one HOP in the demo, an interactive list, which is visited twice. In the first, finding an item moves it to reveal piece of puzzle needed to retrieve the inventory item. The 2nd visit was a standard interactive list. The puzzles are new (to me). They vary in difficulty, but are none too easy even at the base level. I had to skip the very first one.

CE BLING!
First, this game is caught between a CE and an SE. It is too well done for ordinary standalone SE status. But to my mind, it does not make it high enough for anything more than a mediocre CE. Considering the noise in the forums lately about lack of quality CEs, I doubt this game will get the reaction it deserves.

What it has are the standard CE extras. Gallery = wallpapers x8, concept art (HD) x8, music x6. Separate displays of Achievements – story achievements are on plinths in one room, performance in another room displayed as medals. Collectible heart lockets x 46 (one, indicated, in each location). I looked everywhere and I could find NO SG!

COMBINED IMPACT
Much better than I expected, after playing the first game in the series. The game is mostly a fairly easy adventure. It is a good easy game for those who want to become more confident in adventure gameplay, and a relaxing time for the more experienced player. Not much in it for the expert crowd. I will wait for the SE of this game, because it’s got nothing unique about it. Released as a standalone SE, I would have had no hesitation in recommending it.

I recommend this game as an SE!
Frodo

Played the trial, and loved it!  Wonderful creepy atmosphere.

BFG forums say the SG is missing from the demo, but will be there once you buy it.

I admit the SG can be handy, but I don't understand these comments of 'I won't buy a game without the SG'.
Surely the main reason to buy again, is because you enjoy the game?  Not to read the SG?

I think a remarkably large number of people actually do rely heavily on the SG, more than they admit. I just think it would be poor bargain without it, though am too stubborn to look at it even when I do buy CE. I just skip lol.
Riddick

I betaed this one.
Thanks for the great review JTF.
I see I better make time to demo it.
Sponsored content