Royal Detective: Queen Of Shadows
by Elephant Games - May, 2014 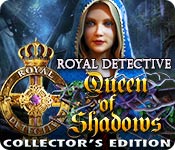 Princess made some mistakes in the past, not always using her magic for good. But she’s made amends, and that’s all forgiven now. She has finally found her mother after five long years. But just as Princess runs to embrace her, a band of thuggish trees kidnap her mother!

You’re the royal detective she came to know so well, and you’re Princess’ only hope. She’s still just a girl, and her magic isn’t quite strong enough to defeat the villain who’s taken her mother. Help reunite them – and uncover a devious plot by an evil king and his brothers!

FIRST IMPRESSIONS
It’s a good opening. Young girl running through the dark woods. Stops, stares, ”Mother!”, reaches for the woman she has been searching for, for 5 years... and she is snatched away. This sequel to the fabulous Lord Of Statues promises to be as least as good.

SIGHTS & SOUNDS
I have run out of words to describe the awe-inspiring artwork we are seeing these days, especially from this developer. So I won’t try to say more than it is truly magnificent, as you’d expect, and there is no down side. The music is also breathtakingly lovely. In particular, one track with a piano lead that sounds like a love song waiting for lyrics. The background sounds are wonderful too. Voiceovers, superb. I am particularly fond of the skull’s echoing and resonating tones.

WHAT’S HAPPENING?
You don’t have to have played the first game of the Royal Detective series, Lord Of Statues, but the game assumes you have. You have received a cry for help from Princess, who you last saw in that game, then aged maybe 7 or 8 years old. It is 5 years later, and the teenager has finally found her mother, who has now been kidnapped. You meet her at a strange and magical city, and are greeted by a skull. He is the spirit of the city’s keeper, and your new hint.

Princess herself has a good grasp of magic these days, and a fair idea where her mother might have been taken, so you follow her lead. Then some.. thing... attacks her in the forest. This is shaping up to be a dangerous case. It is also a much darker story than the first, where skeletons and war and evil magic abound.

Back story is delivered in mini-game format. The first requires you to paint (by code) an image. The second is a panorama-style game where you must get your hero from home to the castle past many obstacles. The third has you playing a series of align the parts of the image game – usually used to define star constellations. Each time you progress, another piece of the story is revealed.

GAMEPLAY
The gameplay is the familiar:  HOPs searched by interactive list, and an array of puzzles both known and unknown, varying degrees of difficulty. There is no journal but there is an interactive jump map that gives you active tasks, and a hint system that tells you your next move and takes you there. There are 4 levels of difficulty, and 6 chapters, of which the demo covers 2.

There are also some differences. For example, we get a fire dagger early on, which so far we’ve been able to keep. Likewise, we receive a magic book, and a magic gauntlet, both of which will be used many times during the game. (I believe, based on the evidence of the demo). We receive magic items that can gather hidden objects within the locations that have been previously indicated (I feel a ghostly presence here), but invisible. These mini-collections are small, 5-7 objects, and the vessel disappears once it’s been used. There is a significant amount of this sort of activity.

There are roughly 20 achievements, all performance based. There are also 25 collectible “little dragons”. In the collectibles room, there is also an album with 12 spots for something I didn’t identify in the course of the demo. No replayable mini-games or HOPs. Bonus chapter and Strategy Guide.

COMBINED IMPACT
Wonderful! Magical! Loved it! A worthy successor to Lord Of Statues, though darker.

I recommend this game!
sassylassie

I agree with Justthefacts but...

Not sure if it was just me, but this wasn't one of Elephant's better games.  To me I felt it was a little lackluster in game play.  VO's was awesome, but if remember correctly, the mouths didn't move again, just something to me was missing.  I know they could do better because the MCF one they did was off the hook.  In fact it was the only MCF out of the series I did like.  The rest of the series when BF did it to me took a serious nose dive.
JustTheFacts

I hear what you're saying about the game, and I agree, looking at it again, that it is a bit odd in some of the graphics, and I felt less enthused. But second time playing the demo (also did beta), it is often a bit hohum
Sponsored content