Riddle of the Mask

Riddle of the Mask 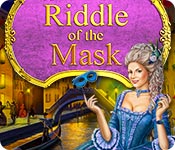 Become a real detective of the Ancien Régime! The most beautiful places of the world will spin you around in the melodies of carnivals and leave you with indelible impressions of visiting these renowned festivals! Complete 120 unbelievably entertaining levels and collect a multitude of trophies while experiencing an enchanting 18th century carnival atmosphere!

FIRST IMPRESSIONS
Even I’m impressed. Yes, it is another serving of identically structured 8 Floor fare, this time of the pictogram puzzles. But the theme, backgrounds and most especially music, create a whole new feel absent from their previous offerings.

SIGHTS & SOUNDS
The pix are gorgeous. With 6 carnivals to attend around the world, we have 6 masks and themed backgrounds of (for 8 Floor) astonishingly beautiful images. Likewise, the music varies according to where the carnival is set. It is also wonderful! The atmosphere is totally unlike the bland tasteless games I, at least, have come to expect. It is not a wide screen game, but at least it has wallpaper on the sides.

GAMEPLAY
I promised in previous reviews to give more time and energy towards doing an in-depth and original review, the day 8 Floor released an original game. While this is still the same structure as all their games, at least the theme gives us a breath of fresh air, so I will encourage further adventurous modifications, by commenting more on this one.

Griddlers are also known as pictographs. They involve creating an image in tiles by following a series of numerical clues at the beginning of the columns and rows. Even if you have not played this kind of puzzle before, it is easy to get a basic understanding within a few riddles. They start out easy, and get progressively more complex as you progress. Although they are supposed to produce pictures, these riddles have only the barest resemblance to an image, and my imagination pretty much defeats me. Most of them, I simply do not know what they are supposed to be.

8 Floor are renowned for their tough stand early into these games. You are only allowed 2 mistakes and 1 hint at the beginning. Later, they are not so tough, and you can buy more options if you want.

There are 6 festivals, and 20 masks in each, for a total of 120 levels. Each level has a 3 star system of ratings. You require a certain number of stars in each festival before you can move to the next. But a perfect score is not necessary, and you can repeat any level to improve your star rating.

The stars are granted based on 3 different measures:

1. Number of coins earned
2. Time taken to complete
3. Use of hint and mistakes

One feature I don’t remember seeing before, and which is a most welcome addition, is a ‘cancel action’ button in the top left corner (it is hard to spot). You can drag your cursor to this spot if you have started an action and realise that it is wrong. In the past, you would sacrifice a mistake for it, at best. Now, you can correct your actions without penalty.

The coins you earn can be used in the shop, where you can buy more hints, mistakes and other power ups. Mistakes can be bought for as little as 2000 coins, which is the earnings of a half a dozen levels, roughly.

There are a large number of trophies, mostly based on completion of different levels, but also ones like ‘earn 20000 coins’.


COMBINED IMPACT
Again, it is nothing exceptionally new here from 8 Floor, except that they have created an atmosphere that separates it from other games of its type, and for once I feel enthusiastic about this pictograph release.

Now why coulodn't this game have come out yesterday?

I could have bundled it with Violett, in the 2-For-1 sale at BFG!

Did you end up getting Violett?

And the avatar is a temp, while I decide how patriotic I want to be. Maybe I'll keep it till ANZAC Day on the 25th April. That is the day we remember all those who have died in war, and dates back to WWI.
Frodo

Justie, I got Violett just now.  I'm determined to get past this bathroom scene.   *puts on her determined face*

Can't wait to hear what other madness is in that game.

That shark monster is NASTY!   *sulks*