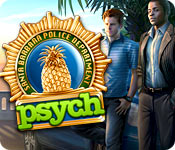 Welcome to the wacky world of the hit television series, Psych! When a prominent planner is murdered at a local wedding expo, Shawn and Gus jump in to help out the Santa Barbara Police Department. But it turns out the murderer is just getting started! Use Shawn's heightened observational skills and Gus' eccentric expertise to solve the crime in this hilarious Hidden Object game!