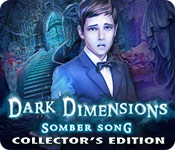 You’ve traveled across the country, tracking down dark dimensions in search of your missing family, when you stumble upon a violent one that has taken over the city of Seven Oaks, North Dakota. The black smoke is chasing people and captured a young girl right in front of your eyes. What caused this dark dimension, and who is being controlled by its influences? You must investigate for the truth behind the town’s recent tragedy if you want to save its future. A friendly spirit may help you, but can you trust him? Free the people and save the town in this exciting hidden-object puzzle adventure game!

Little change from the Beta, except the Match 3 game in the Extras.

FIRST IMPRESSIONS
Wonderful game. From the opening moments it is clear that this is going to be a first class sequel to the previously excellent 3 Dark Dimension games. There is drama and eeriness from the outset, and the intro looks so good! My only objection, it’s another freezing cold game! Hey devs, have pity on all those poor souls suffering an insufferable winter! I live in Australia, where we are having a drought, and even I’m sick of the sight of snow!

SIGHTS & SOUNDS
Gorgeous. The snow makes everything look so clean and bright! And the graphics are excellent. HOPs clear as a bell. What more can I say? The game is visually wonderful. The soundtracks are equally good. The voices in the cinematic cut-scenes are excellent. There are some great special effects (both sound and visual). The music ranges from ominous to scary. And there are a lot of frightening moments.

WHAT’S HAPPENING?
A fire in the town’s music school took the lives of 7 children last year. Now, on the anniversary of the tragedy, there appears some mystical and deadly smoke throughout the town. A little girl comes to your hotel room for help, but the smoke grabs her and drags her away, her body flying through the air on seemingly nothing but smoke. Yes, this is the evidence we need to accept that another Dark Dimension has formed, this time around the small, musically inclined town of Seven Oaks.

GAMEPLAY
As with the previous Dark Dimension games, many of the puzzles in this game are too difficult for me, an intermediate player whose weakest point is puzzles. Still, there is more adventure action than puzzles, and so I love the game anyway. There are not a lot of HOPs, and each is a progressive word list. So, you must find an item, use it to find another, and so on until you get the inventory item. Each of the HOP scenes are visited twice, using the same search method.

There is a directional hint, and a video journal (no notes, just replayable videos from the game, some of which have useful information on them). The journal also has a tab for flashbacks. These are music sheet pages (10) that you must collect, in fragments (3 each), and they tell part of the backstory with simple cartoon drawings. The interactive jump map is good, and tells you where action is required. There are 3 levels of difficulty.

CE BLING!
The bling! doesn’t overly impress me so far. Just the ‘flashbacks’ and a few wallpapers and concept art. Music tracks (7) of course. There is also “Developer’s Diary” which includes 50 shots of the team working on the game. There is also a Match 3 game with 10 levels, all of which can only be unlocked by playing the bonus chapter. That may be interesting.

COMBINED IMPACT
Excellent game. I played the beta for this and it is the first beta I have played where I had nothing to suggest for improvements. (Tough old bird, aren’t I?) It is really beautiful as well as fun.