Mystery of Unicorn Castle: The Beastmaster
by Meridian 93 - March, 2014 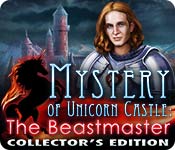 The Beastmaster, Lord of all Beasts, kidnapped a young girl by the name of Sophie. You must use your skills to emerge victorious in this battle and save the girl. Make your way past the ingenious traps of the Castle and overcome the beasts to restore the Unicorn for a victory over the forces of evil! Can you solve the Mystery of Unicorn Castle - The Beastmaster? Interesting location and unusual puzzles will keep you on the edge of your seat!

FIRST IMPRESSIONS
This game is a sequel to the Mystery Of The Unicorn Castle, which was released 5 years ago. That sure is a long gestation period. But it may well have been worth the wait.

While not an extraordinary game in terms of production values, it does have a unique approach to gameplay that I find very intriguing, and lots of nifty little ways in which it is made more appealing.

SIGHTS & SOUNDS
With a good and engaging intro, this game involves your emotions straightaway. The graphics are very good. Clear and well drawn. Nothing to complain about, but they are not outstanding either. I do love, though, the game interface. It is an almost iridescent almost-white blue against a dark background, with the bare minimum of clutter around the (lockable) inventory bar. The game itself is quite dark. Some may feel it is too much so. A neat trick is having you zoom into the close-ups rather than opening a window. And you can choose to turn off this feature if you wish.

The game is narrated by our character, and for most part is very well done, although his intonation seems a bit off from time to time. There is quite a lot of talking involved, so many will be pleased to know that you have the option to switch this off as well. Special effects are good, and there is a variety of ambient sounds, including silence. The music is sinister, yet quiet rather than frightening, and includes vocals.

WHAT’S HAPPENING?
You do not need to have played the original Unicorn Castle game, which was, if I remember correctly, a lot of fun, with interesting gameplay, but not dazzling, and not relevant to this story.

A young girl has been kidnapped under unusual circumstances and we have come in to investigate a nearby abandoned castle. We catch a glimpse of Sophie and her kidnapper, some kind of beast, going into it, and we are off in pursuit. Along the way we also meet a ghost who asks us for help, in return for assistance in the matter of the kidnapper. Oh yes, and let's not forget the giant, aggressive, almost human, rats!

GAMEPLAY
This game has some HOPs, interactive list, but really not many. There are slightly more puzzles. Nothing is actually difficult, and I didn’t even use the directional hint, or skip. You do have a choice of 4 difficulty levels and I was playing on the easiest, but I really don’t see it will make much difference. The interactive jump map gives you active HOP scenes as well as active tasks, visited and unvisited areas. There is a diary that holds your notes and replayable videos.

What’s unusual about this game is that along the way, quite frequently, you will be asked to decide which way to behave. Help the ghost or not? Kill the scorpion or shoo him away? Allegedly it will alter the way the game progresses, and it certainly does change the achievements you win.

CE BLING!
There are both achievements and collectibles. The collectibles are Halloween pumpkins, and there are 50 to be found. They are not all easy to find, either. The other collectibles are wisps, which instantly recharge your hint meter when you catch them. They only come into existence if you need them. There are also 8 pages of historical notes to collect.

The achievements have their own Trophy Room in the main menu and are given out for a mix of both story-related (and for once, you may fail to get a story one, depending on your choices), and performance-based. Your choices for good/evil are divided on either side, for a weighing up at the end, I guess. A panel pops up in the game when you receive a trophy, and again, you have to option to switch it off. I know many will like THAT feature!

The usual SG, quite useful, and bonus chapter. There are inaccessible (in the demo) gallery items and music, replayable puzzles and HOPs. There is nothing here that excites me, but that weighing up of our ‘karmic choices’ is interesting.

COMBINED IMPACT
I really enjoyed this game. It was fun from the very beginning and kept my interest all through the demo. Maybe it isn’t a world class performance, but it is very good, and has that indefinable fun factor.

JustTheFacts wrote:You do not need to have played the original Unicorn Castle game, which was, if I remember correctly, a lot of fun, with interesting gameplay, but not dazzling, and not relevant to this story.

This is one of the main things I was wondering, so thank you for including the info!  The first one was a straight HOG if I remember correctly, and I know that I found it interesting at the time that I demoed it... which was forever ago!

You're welcome genki - ironically, it wasn't until I'd actually pasted this review in from my 'word' document, that I realised I hadn't mentioned that info! So glad I stopped to put it in!