Tales from the Dragon Mountain 2: The Lair

Tales from the Dragon Mountain 2: The Lair

Tales from the Dragon Mountain 2: The Lair
by Cateia Games - March, 2014 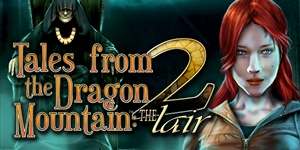 It has been years since brave Mina Lockheart defeated Lord Strix. But dark shadows are rising once again! Spirits are restless! For he has awaken!

Evil Lord Strix is breeding a new army to enslave all creatures from the Dragon Mountains!
It is once again up to Mina and her best friend spirit Malik to travel to distant parts of the world and find clues how to open the passage to a hidden wasteland - Lord Strix's lair. Meet different characters along your journey, help them and have them help you. Search and discover new places, but hurry! Lord Strix gets stronger by the minute!

We are used to HOPAs, the occasional puzzle/adventure lite and purely HO games. Rarely do we see this kind of game on Big Fish – a near enough to pure adventure, so it is easy to be disappointed because this game does not fulfil our expectations. But measured against its own genre, this is a wonderful little adventure lite game with puzzles and easy gameplay.

This game has good (HD optional) graphics, very well done of their type, which is also unlike the usual way HOPAs are animated. I never know what to call the distinctive graphic style. I personally don’t like it, but the game is bright and colourful, varied engaging enough for me to overlook it.

The characters are pure chatterboxes, and although you can skip them, these little dialogues are a large part of the game experience and are at times quite amusing. They are also very well acted and lip synched. The background noises are delightful in the locations seen so far, and the music is unobtrusive.

In all these ways it is not a HOPA game, but there are occasional HOP scenes, of the type where a ring of silhouettes encircles the item you will need to use these objects on, and a couple of pseudo-Frogs (fragmented objects, in this case in only 2 or 3 pieces).

There are a total of 30 mini-games, according to the game stats, and unusual for this type of game, there is a fast skip (on level 1 of 3 difficulties). The puzzles are in some cases arranged into 3 or 4 layers needed to open the lock, each one slightly harder than the one before.

The journal is a necessary and useful item, and holds the safe codes etc. that you will need. It also has a section for achievements, game statistics (including things like how many puzzles you have completed from the total, and a game timer), and a help section with basic interaction instructions covered in the tutorial. It seems designed with those who are not normally adventure gamers in mind.

There is a symbol of walking feet on the left of the (lockable) inventory bar, which toggles exit indicators. There appear to be at least 3 worlds that we will be exploring, and no map in sight. Hint is directional.

One of the achievements is for collecting all 20 of the stone dragons hidden in the locations. One frustrating thing with this game is that there are sometimes stone dragons as part of the location, not the collectible ones. Annoying.

This is a sequel to the original Tales Of The Dragon Mountain: The Styx, which I have not played, but it would seem this is a direct follow on. I haven’t seen anything that suggests you’d need to have played it, except that the characters and story are not familiar to us. An evil sorcerous-looking guy called Lord Stryx is putting together an army to go up against our character, Mina. Which makes me wonder just how powerful ARE we? Our elfin companion seems to be light entertainment rather than actually useful, but maybe he is useful later on. I finished the trial – unexpectedly, always a good sign – with him whimpering about the giant spider.

COMBINED IMPACT
I don’t know if this game is really me, but it would certainly be an excellent starting point for anyone wanting to improve their adventure and puzzle skills. It is simple and pretty and involving. I recommend it for those who like their adventures easy, or who want to play something OTHER than HOPAs for a change. As a stand-alone SE, very good value!

I recommend this game!
volnole68

I saw this early today and waited on your review before I checked it out.  I think it might be a buy with one of my coupons.  Thanks!!
JustTheFacts

Pleased as punch to know you wait for my reviews sometimes

I think this one's a coupon buy for me too. And am contemplating the first one. Will do the demo to decide, but looks very similar in the walkthrough
RenaissanceMom

Bought it this morning to get my final punch towards a PCC.