Available at:
GamersGate (or get bundled with Season 1 )
GOG
Steam

THIS IS DOWNLOADABLE CONTENT - You must have The Walking Dead Season 1 in order to play this game.

Centered on a truck stop on a Georgia highway, this DLC episode for Season 1 of The Walking Dead by Telltale Games tells five linked stories of survival in the wake of the zombie apocalypse. From day 1 of the undead plague to 400 days later, The Walking Dead: 400 Days offers more of the horror and human drama of Robert Kirkman and Telltale’s award-winning series. Echoes of the choices you made in Season 1 will carry over into '400 Days' and the choices you make in '400 Days' will resonate into Season 2.
Key Features 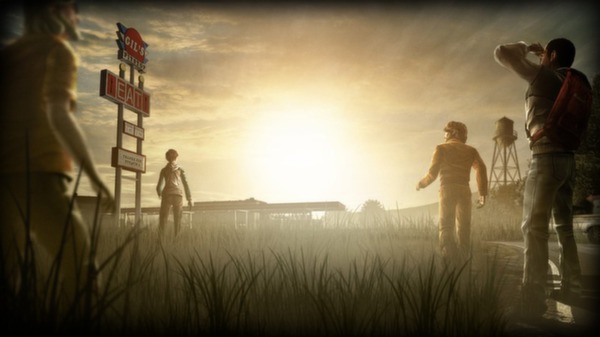 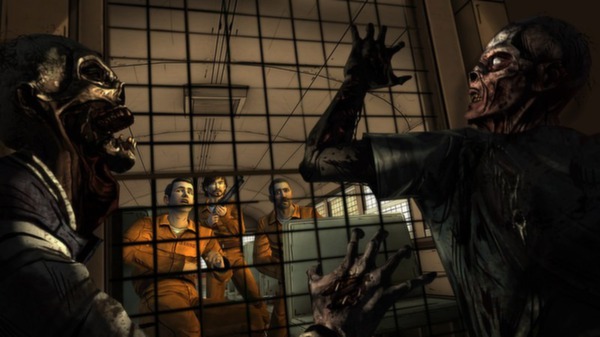 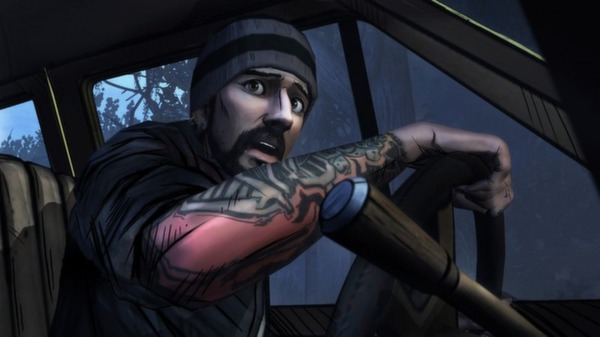 For technical stuff and general information on this fantastic series, see my review of Season One HERE.

400 Days is a short game -- a hour to an hour and a half -- that tells us about the Zombie Armageddon from five different points of view.  I had no idea what was going on when the game started, just that I needed to choose who I was going to be.  I didn't realize that I was going to be playing ALL FIVE of the characters, thus I played them out of (chronological) order. 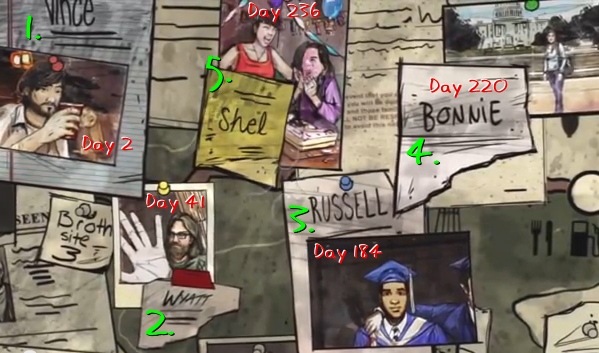 Although you can play them in any order you wish, I recommend doing them in time-order since their stories can overlap.

The first two, Vince and Wyatt are loosely tied together by an image that you'll miss if you're not paying attention.  You'll see it at the beginning of Wyatt's story.

Days three, four, and five are more obviously connected, this time by a location.

In the end you will find why we are being told these stranger's stories, and your choices, like those in Season One, will affect how things play out in Season Two.  Not only that, but we will also find out what happened to some characters we met towards the end of Season One --

I did not feel a deep connection to these five characters; perhaps because we didn't spend much time with them.  I am ever amazed by Telltale's ability to evoke emotion, and even though 400 Days only works out to about half the length of an episode, the writing still had that effect on me.  There were some tough decisions to make!  In addition, they made me uncomfortable, sad, disgusted, offended, and even angry.  I truly hated one of the characters we met along the way, and I don't say that lightly.  I hated him with with an almighty passion, and even thinking about that guy makes my blood boil.  We met some sick and crazy people during the first season, but none compare to this guy, whom we meet during

story.  Once you play it, you'll know what I'm talking about -- no explanation needed!