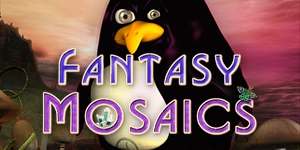 Embark on your fantasy journey to distant lands and experience this new exciting collection of mosaic puzzles through 100 custom built levels. Brimming with even more challenging larger puzzles and great power-ups, Fantasy Mosaics will take you to new heights on this magical adventure. Enjoy the journey and have fun building your fantasy garden!

I love these mosaic games

This one looks much prettier than any others I've seen. Am tempted by it, but just spent last $2.50 on the Doorways creepy one lol

You got the Doorways deal?  And I haven't even posted it yet!

Went to see the scary vid. Was scared enough I didn't dare to say no lol

Big Fish are doing a very late release on this one! Soft release today, when gamehouse and iwin already have Fantasy Mosaics 2? Wow! Big Fish is protecting 8 Floor's business

Really looking forward to your review for this one, Justie

Well, there’s no way to ignore it, the graphics aren’t perfect, and they are a bit blurry on a large monitor. The backgrounds are that 3D super realistic style I dislike. But they’re good enough, and show nice locations, and let’s face it, it’s not the most important feature of a mosaics (nonogram, pictograph) game anyway, is it?

Can’t say I’m all that rapt with the music either, and I definitely would have liked this game more if it had more harmonious and varied tones.

What this game does have going for it is its different feel, structure and level of difficulty.

Important start: you begin with 1 hint, which you can increase as you score, and 2 allowable mistakes, which are also automatically increased as you reach certain scores. I know that will be on a lot of minds!

However, game is not easy for long. In the first 2 levels, I found it easy to score all 3 gold cups (as opposed to silver or bronze). But in level 3, the grids go to 15x20, and while not particularly difficult for that size, it’s a lot easier to make a mistake. I had to redo several of these levels. But then, these games are not something I’m awfully good at.

I like that the tiles you use aren’t always the same from grid to grid. Variety is the spice etc. Also, that most of the resulting pictures are recognisable as the name they have been given.

There is no serious attempt at a story line, just a bit at the beginning. And no achievements. But at the end of each level, you get an addition to your meditation-style Asian garden. One of which is a friendly hippo! This too is in that shiny hyper realistic style.

Oh, and one of the backgrounds has a dragon. Inquiring minds like to know.

In all, an improvement on the same ol’ same ol’ we’ve been getting from those guys I love to nag on the subject of variety. See, guys, it really isn’t that hard!

This release is timed perfectly for me. I have been feeling too drained to focus on HOPAs lately and have just this weekend started looking for suitable alternatives, and this is exactly what I had in mind for those days when you just need to lose yourself in the numbers.

JustTheFacts wrote:Oh, and one of the backgrounds has a dragon. Inquiring minds like to know.

I'll try and hold out till Monday though, cos that's Bonus Punch Day

Thanks for the wonderful review Justie

What is happening to your dragon eggs? And they going darker?
Frodo

No, they're not going darker.  They were cracking, and now they have a big hole in them, cos they're getting ready to hatch.

Right now, they're sitting in their eggs, watching the outside world through that small hole.  And in 5 hours... they'll venture out.

And just saw Fantasy Mosaics 2 on GameHouse.  Getting that one right now.

JustTheFacts wrote:Oh this is so exciting!!! Frodo's gonna be a dragon mummy!!! In time to get presents!!! YAY!!!

Just spotted them in Fantasy Mosaics 2!

Did you stay up for them?
Frodo

JustTheFacts wrote:Oh this is so exciting!!! Frodo's gonna be a dragon mummy!!! In time to get presents!!! YAY!!!

My little darlings have gendered now

You can just click on them to get more information.  But I named them (from left to right)...

Cool names! I checked out their stats. Also cool. How come they look different now, with the dark ones in different positions? Are they growing at different rates?
Frodo

They look different when they gender male or female.
Also, the dark ones have 'dimorphasis', which means the males and females look different from each other.
But the light ones - male and female look the same.

), and they'll look different again (with the dark males looking different from the dark females)