Bluebeard's Castle 2: Son of The Heartless
by Fanda Games - February, 2014 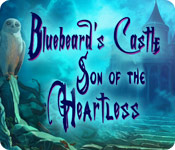 Eighteen years have passed since the last of Bluebeard's wives managed to escape with her life, and the life of their unborn son. As he approaches manhood, the young man now faces nightmares that threaten to drive him mad. His aunt reveals the true tale of his father's past. If he does not destroy the immortal heart that cursed his father, he shall die before his next birthday. Even as he approaches Bluebeard's Castle he can feel his heart slowing. He doesn't have much time. He must find the dark heart... or die trying in Bluebeard's Castle: Son of the Heartless, a heart-pounding Hidden-Object Puzzle Adventure game!

Re: Bluebeard's Castle 2: Son of The Heartless

Update on the original Beta Review

Bluebeard’s Castle [2] (: Son Of The Heartless)

FIRST IMPRESSIONS
I remember having a lot of fun with the first Bluebeard’s Castle, but I don’t think it was ever a big hit and I certainly didn’t expect a sequel. But then, who would have guessed Bluebeard would keep a bride alive long enough to have an heir?

SIGHTS & SOUNDS
This game is somewhat different in looks, but it is still clearly Bluebeard’s Castle that we arrive at, even if it is totally dilapidated. The intro shows us a marvellously clear image of ourselves, the unfortunate son of Bluebeard. This is followed by the complete backstory of Bluebeard and his curse, told in an almost graphic novel style. The graphics for the rest of the game are fantasy graphics – bold and colourful, surreal and a bit cartoony. It is not a bad choice, though I suppose many will criticise. But to me it was similar to the fantasy graphics in Nightmare Realm. In any case, they are clear and very high quality, whatever you think of the style.

The music in the intro is dramatic and arresting, but in the rest of the game so far, is eerie and non-intrusive, and in keeping with the first game, there are no voiceovers. One thing I do miss from the original is the rhyming hints. They added a little something different.

WHAT’S HAPPENING?
You are having nightmares in which you are a monster, stealing the lives of innocent women. Your aunt is forced to tell you the truth about your father, and how she defeated him and saved your mother’s soul. (This is the character we played last time.) This has brought a curse down on the castle and on the heirs, who are all doomed to dying young. You must find the “dark heart”, which is the demon force of the curse, to save not only yourself, but also the castle inhabitants and the town below.

GAMEPLAY
There are more puzzles than HOPs so far in the demo. The puzzles are easy, with the exception of a couple with unhelpful instructions. The HOPs are interactive lists, with a fair amount of interaction. You can click on an item in the list and see a silhouette of it on the side. The scenes are not animated, except for a specific item on the list which must be caught on the move. This fun and not hard. There are a lot of fun animated graphics outside the scenes to make up for their absence here.

Adventure gameplay is not too difficult, the journal is useful. The hint shows you what item you need next and where it is, but you must go to the map if you want to jump. And the map does not indicate active tasks, so the two must be used in tandem. The game moves a little slowly at this point, but the exploration of the old castle holds many little quests.

There is a game timer, and achievements based on the statistics collected. These are all based on the time it takes to complete puzzles, including HOPs. Each achievement is awarded on a different time range, so you get awards of one sort for doing a puzzle under 1 min, and another for under 3 mins. Etc.

COMBINED IMPACT
I really enjoyed myself, despite the somewhat old-fashioned style of the game, and it’s slightly cartoony feel. I played the beta for this game ages ago, and am glad to say that specifics have been changed, obviously as a result of the survey. I love a developer that listens to its players! Extra brownie points for this entertaining surprise package!