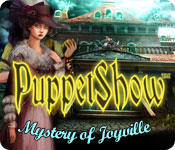 The puppet show in Joyville was once a wondrous attraction  until the great fire. Now, rusted gears and dark mysteries lay within  strange machinations and disheveled puppets. A young boy, Simon, is the  most recent in a long line of missing people. In PuppetShow: Mystery of   Joyville, you are tasked with solving nefarious puzzles, finding hidden clues, and uncovering the dark secrets of a town that is anything but  joyful.

What a treat it is to be playing Mystery Of Joyville again. The GRAPHICS are simply beautiful – bright, colourful, exquisitely detailed. Even the ‘ugly’ scenes look wonderful.

Compared to the later PuppetShow games, Joyville is very simplistic, and very much a HO GAME. There are HOGs everywhere you turn, and each LIST is full of items such as “4 clocks”, so you get to stay put for quite a while. There is some INTERACTION, but it is not indicated on the list, only by sparkles.

The PUZZLES were delightfully simple; in a couple of cases I was waiting for the catch! For me to call a puzzle easy, it must be very simple indeed.

Some of the appeal of this game is, in fact, its simplicity.

I liked that there was NO MAP, NO HINT outside HOGs, NO VOICEOVERS, NO VIDEO CUTSCENES. I’m not saying I’d want all games to go back to that quieter game style, but it is nice for a change.

I also love the way animation is implied by a series of stills.

I got a real buzz out of replaying this little gem.

I liked this first Puppetshow all right, but I really enjoyed the second one, Souls of the Innocent. It's been years since I played it but it seemed 'meatier' to me.
JustTheFacts

Yes, it is meatier, I think. I loved those two specifically. I never took to Lost Town at all. I like string controlled puppets, all these mechanical ones give me the willies.

Thanks for commenting on my reviews. I may not be seen by the 100s I get on BFG, but I get more feedback here. Makes my day every time!

Are you kidding? I *so* appreciate the time and energy you put into writing out your thoughtful, detailed reviews. I always mean to write some of my own but... um...

Well, I began reviewing games just so I could keep track of which I liked, and even more importantly, why I had not bought a game that seemed okay months down the track. Then someone suggested posting them, I went to the bfg forum for the first time in my life - and now they own me!

I knew I never liked forums for a reason, and if I didn't know that there *were* 100s of people who read my reviews I'd not bother with them at all - they are a catty bunch. Then genki asked to post one of reviews here, and it was love at first sight!

Believe me when I say it is my privilege to write. I have been ill for a long time (nothing truly awful, but obviously serious, please don't feel bad that I told you), and eventually it has got to where I can no longer work in any capacity, and doing the reviews keeps me feeling purposeful. I get up every morning and go to 'work', and I look forward to my next productive day. So does my fluffy grey baby, who has my office as her territory, and therefore gets to spend more time with me if I'm on the computer.

Options include separate sliders for Music and Sound, plus Full-screen and Custom Cursor.

Never have I seen such a colorful palette for such a creepy story.  Make no mistake!  There is a horrible truth behind the disappearances in Joyville!

We have no journal, and will instead find small pieces of the story scattered about the town.  Be sure to read every scrap you find, as the full story is what makes the game compelling (especially towards the end)!

The adventure portion of the game has no hint button, but there are two things that will keep this from becoming a problem:  1. All exits on the scene(s) will periodically sparkle, so you won't be able to miss any locations, and 2. The game won't let you go back to an area you've already finished.

Instead of your standard toolbar, we have a 'Tools' button that will fan out when you click on it.  Very pretty, but a little less convenient than the retractable toolbars in modern IHOG's.

Hidden objects are your standard find-by-list, but you will have some multiples on every scene.  ie. 4 bracelets, 4 spiders, 2 fans + the rest of the list.  There is some light interaction on most scenes.  You'll find a new HO popup at every location... and sometimes two separate HOS in the same room! These scenes do NOT repeat.

Puzzles are few and not very difficult, but they are SKIPPABLE.  HINTS are refillable during the HO scenes.

PuppetShow: Mystery of Joyville is deceptively colorful, but there is a terrible secret within.  The game is HO-heavy, and will take maybe 2.5 hours to complete but I definitely recommend starting the series here to learn the whole sordid story.
_________________
Never be a prisoner of your past.
It was just a lesson, not a life sentence.