A Tablet for HOW Much??

A Tablet for HOW Much?? 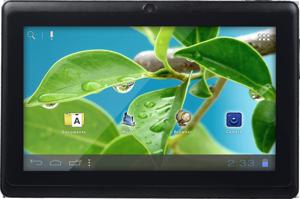 What’s that? You’d love a new tablet – for yourself, your parents or the kids – but think you need to take out a second mortgage to afford one?

In an effort to help bridge the “digital divide” – the gap between those who can afford technology and those who cannot -- DataWind has just launched the UbiSlate 7Ci , the least expensive tablet computer in the U.S.

I’ve had some hands-on time with the 7Ci, and while it wouldn’t be fair to compare its performance to tablets nearly 15 times its price – such as the latest Apple iPad and Samsung Galaxy Note family – you might just be surprised at what it can do.

For those who like to know specs, under the hood this UbiSlate features a Cortex A9 (1GHz) processor – comparable to the original iPad – along with 512MB of system memory (RAM) and 4GB of internal storage. There is a microSD card slot, however, capable of memory cards up to 32GB each. 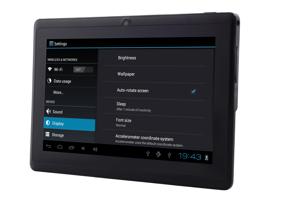 Along with the built-in Wi-Fi (802.11b/g/n), the UbiSlate 7Ci tablet supports external 3G for mobile broadband data connectivity; a USB adaptor is included in the box, to snap in a WAN stick , if desired. The tablet has an embedded G-sensor for device orientation, therefore it knows when you’re holding it vertically or horizontally.

The tablet itself is 7.2-inches tall by 4.8 inches wide and 0.4-inches thin, and weighs 0.7 pounds. It's quite light, which makes it comfortable to hold while reading ebooks. Measured diagonally, the 7-inch TFT capacitive multi-touch screen looks pretty good straight on – with a resolution of 800 x 480 pixels – but once you lean left or right it can be tough to see clearly.

Other features include a front-facing VGA camera (no rear cam), external speakers and 3.5mm headphone jack, volume up and down buttons, microphone and microUSB slot.

In the box is an AC power adaptor, microUSB cable (say, to connect to a computer) and the abovementioned adaptor to connect full-size USB accessories. The 3.7-volt Li-Polymer rechargeable battery only yields about 3 hours of play between charges. This is the weakest link in the chain.

Along with access to popular Google apps and the Google Play store, the UbiSlate 7Ci has many bundled apps preloaded on the tablet including DataWind Education (lessons in various subjects and languages), security software, email client and web browser, an ebook reader, Kingsoft Office (a free Microsoft Office alternative), movie editor, games (Bubble Blaster, Chess Grandmaster, Cut the Word, Hit the Difference, MineSweeper, Solitaire Plus, Sudoku Plus), and more. 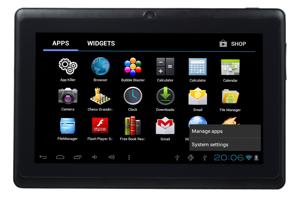 Value notwithstanding, it’s far too early to tell whether the UbiSlate 7Ci will be a hit in North America – as it is in India, for example – but for DataWind to break the $40 price barrier on a 7-inch Android tablet is in a word, newsworthy. Think of all the people who otherwise can’t afford a touchscreen tablet – including school boards who could now equip students with these small, thin and lightweight computers. Price is no longer an excuse to put technology in the hands of virtually everyone. OK, so it’s no iPad or Galaxy Note , and the battery leaves a lot to be desired, but it’s hard to deny there’s a lot of bang for the buck here.
On a related note, those who want more power, features and connectivity might also consider the UbiSlate 7C+ tablet ($79.99), which has an embedded quad-band GSM/Edge modem, while the UbiSlate 3G7 ($129.99) also incorporates a 3G modem, GPS, Bluetooth, and more.
_________________
Never be a prisoner of your past.
It was just a lesson, not a life sentence.